Stephen Quinn keen to make most of new opportunities

Hull midfielder a late starter, with just three caps, all earned in the last 12 months 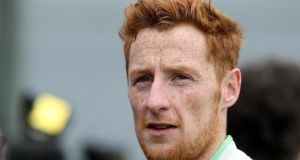 On the Republic of Ireland front the midfielder is definitely a late starter, with just three caps – all earned over the last 12 months – to date.

He had been on the margins as far back as 2007 when he played a season of Premier League football with Sheffield United and he travelled to San Marino for that best-forgotten game in which Stephen Ireland had to rescue Steve Staunton’s side with an injury-time winner.

His club got relegated, though, and the road back into the Irish set-up has proved difficult to navigate from the lower leagues.

“I never got a look-in under Trapattoni,” he says without any great sense of rancour. “I just got in towards the end of his reign. I was pushing hard trying to get into the press, see if I could get my name mentioned.

“It didn’t happen but I got in towards the end. It wasn’t to happen but that’s in the past. Now it’s under new management and I’m looking forward to it.” Watching games Quinn was probably one of the victims of Trapattoni’s policy of watching games on DVD from his Milan home. He has contributed a great deal for Hull City over the last couple of years and won the club’s players’ player of the year award in his first campaign there, but the Italian was slow to pick up on his progress.

Now, he benefits from being at a club which allows the management team to tick so many boxes in one go. “You’ve got four or five players at Hull from Ireland as well so it makes it easy for the manager to get over and see the whole lot of us. That makes a major difference.

“Luckily enough I’ve had a good couple of years and hopefully I can get some minutes.”

It’s not the most outrageous expression of ambition but Quinn comes across as quietly happy with his lot, a “glass half full” kind of character who already manages to reflect with some warmth on an FA Cup final experience that might indelibly mark a more highly-strung character.

“There’s no shame in getting beaten by Arsenal but it’s a bit gutting going two goals up then losing it in extra-time. It’s heartbreaking really but overall it’s been a good season for us so we can’t really complain.” ‘Good spectacle’ “At 2-0,” he says: “I think was thinking, ‘Blow it up! Blow it up! Call it off now and we could lift the trophy.’ You know, being that close, for the rest of your life, you’d be thinking we were the nearly men against Arsenal. But I think we put on a good spectacle. We didn’t make a show of ourselves. And the most important thing is that we stayed in the Premier League. That was the real aim of the season for us.”

His own aims are similarly grounded, to keep doing what he has been doing at club level and, he hopes, get the opportunity to do it a bit more for Ireland.

His brother Alan, now retired, won eight caps between 2003 and 2007; so that’s the initial target and by the end of tomorrow evening’s game against turkey he could be half-way there.

“Alan is always wishing me the best and he comes to all the games and is a good mate. I looked up to him most of my career so to overtake him would be a great feat,” says Quinn.