Shane Duffy ready for Zlatan if called upon against Sweden 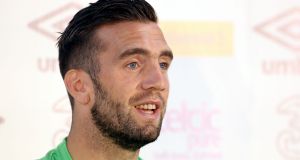 Shane Duffy’s star has continued to rise since his inclusion in the Ireland squad. Photograph: PA

On the night of Ireland’s 1-1 friendly draw against Holland in Dublin, Martin O’Neill expressed the hope that there would be room for individualism as well as the rigorously rehearsed set-piece.

Dimitri Payet’s fabulous strike against Romania on Friday night hopefully set the tone for the tournament. But after Ireland’s training session on Saturday morning, Stephen Quinn echoed O’Neill’s thoughts when he spoke about the detail with which the Irish camp has been pouring over Sweden’s form from set-pieces.

“We have done lots of analysis...just small bits at a time. The manager takes it. We have meetings in the hotel in the evenings. We have left no stone unturned on set pieces. They are a massive thing in the game now. They can win or lose you games. We have done lots on that. So hopefully we can turn them over.”

The Reading player has figured more prominently in O’Neill’s thinking through the defining period of the qualifying campaign and is clearly drawn to his energetic, disruptive influence in broken play. He was chosen along with Blackburn’s Shane Duffy for media duties on Saturday. Both players are emblematic of the shuffle in personnel and fortunes which can occur over a marathon qualifying group. As Duffy said, he just kept his head down and concentrated on furthering his club experience.

“I got called into the play off and wasn’t in the squad and just kept my head down with Blackburn. I got a bit lucky with injuries to Marc Wilson which was unlucky for him and I took my chance in the friendly games. And I am just delighted to be here.”

It would be a huge surprise if either man started against Sweden but there is a convincing case for both of them acquiring significant minutes at these championships. Duffy has made himself stand out. He was a peripheral figure when O’Neill brought him on a summer tour of the United States, handing him a start against Costa Rica in Philadelphia. He caught the eye that night and has progressed to the extent that Roy Keane gave him a fairly glowing reference when asked if he felt Duffy was ready for the elite level of the international game.

“I think so, sometimes you have to throw young players in. That’s part of football. When you look at his short career so far, the fact is that he has gone out and played games regularly at club level. That was a huge boost for him, I think, over the past year or two...going to Blackburn and playing. He seems to be enjoying it.

“A big strong boy and has got lots and lots to learn about the game. He is far from the finished article but he has given himself a chance. A few months ago he would have been touch and go to make the squad. He has impressed everyone in his training and in the games he has played.

“And on top of getting in the squad, I think he has a great chance of making the starting eleven. He has been a big plus this last few months and we are delighted to have him on board. He is very good, obviously, in both boxes, which is pretty important in a centre half.”

The Derry man is quiet spoken and modest and has repeatedly expressed his delight at being involved with Ireland in this tournament. But he isn’t all fazed.

Asked about the possibility of coping with Zlatan Ibrahimovic on Monday evening, Duffy turned to his debut for Everton at Goodison Park. That was in January 2012 and he was sent in against Spurs when the home team were trailing 2-0 to try and cope with Emmanuel Adebayor.

“He was similar -tall, gangly and strong and he was a top player. The likes of Jamie Vardy came from lower leagues and I have played against him a few times. I did all right against Adebayor. I played the next game anyhow. I feel like I have done all right. You have to try and thrive off those kinds of players.”

Quinn, too, will spend this evening and Sunday night hoping that he has done enough to convince O’Neill to spring him at some stage against Sweden. One of the subtle skills which O’Neill possesses is to make each of his players feel that they aren’t just there to make up the numbers at practice games.

“Once you are in the 23 you always have a chance. You like to think you do. I had a decent game against Holland and I am ready and waiting. It is a proud moment for the whole squad, getting here. Me personally: it is the pinnacle of my career. Obviously my brother [ALAN]played for Ireland but never got the chance to play at a major tournament. I am really looking forward to Monday and hopefully I can get the chance.”