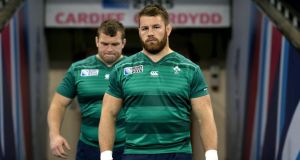 O’Brien punched France lock Pascal Pape early in their Pool D match in Cardiff on Sunday and Bosch was cited for a dangerous tackle during the Pool C match against Namibia.

Both hearings will be held on Tuesday. Ireland play Argentina in Cardiff on Sunday.

The potential loss of O’Brien is a serious problem for Ireland whose flanker Peter O’Mahony was ruled out of the rest of the tournament through injury on Monday.

Earlier, Scotland forwards Ross Ford and Jonny Gray were cited for alleged foul play during Saturday’s 36-33 victory over Samoa that sent them into the quarter-finals.

Scotland face Australia in the last eight at Twickenham on Sunday.

Australia forward David Pocock received a warning for an incident with Wales hooker Scott Baldwin in Saturday’s Pool A decider. A warning brings the same punishment as a yellow card.

Ireland’s chances of beating the ebullient Pumas would be sorely tested should Schmidt’s men be forced to cope without O’Brien, as well as O’Mahony and their injured captain Paul O’Connell.

Ireland are yet to name a replacement for centre Jared Payne, but started their cavalry call by adding 24-year-old Rhys Ruddock to their ranks to offset the loss of O’Mahony.