Scolari: ‘I think it was the worst day of my life’ 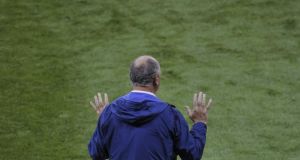 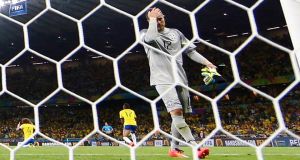 Brazil manager Luiz Felipe Scolari described the 7-1 destruction at the hands of Germany as “the worst night of my life,” but insisted that Brazilian football does not need to make sweeping changes in the wake of the country’s worst ever World Cup defeat.

Scolari spoke to the media for 20 minutes following the seven-goal slaughter, which had some Brazilian fans heading for the exits after just half an hour, and others applauding the Germans in a pointed message to their own defeated players.

The crowd directed abusive chants at president Dilma Rousseff and then changed the words to taunt striker Fred, who was substituted after the sixth goal. When the Brazil players tried to acknowledge their fans at the end, they were met by a furious wall of derision. There would be no mercy from the stands after such a shameful result.

“I’ve lost other matches, but if I think back over my life as a football player, a coach, as a physical education teacher . . . I think it was the worst day of my life,” Scolari said.

Brazil’s manager, who will now lead the team into the third-place play-off on Saturday, accepted the blame for the defeat.

“Who is responsible when the team plays? Who is responsible for picking the team? I am. It’s me. So the catastrophic result can be shared with the whole group. But who made the choices about the the tactical line-up, the way to play? I did. So the person responsible is me.”

Scolari suggested there hadn’t been much in the game, considering the 7-1 scoreline.

“I think up to the first goal, we were basically identical or much better than the German team. The German team scored their first goal in the corner and in four minutes scores another four goals. There was lack of control. It’s not normal but it happens.

“We lost a match, one match, to a great team, the German team. When we finished the game and we spoke to them, the chat we had on the field, they said: ‘We don’t know what happened. Five balls, five goals’. That’s because of their skills.”

Scolari counselled against making big changes to the Brazil team.

But watching the crowd react against the Brazil team at the Mineirao, rejecting their efforts to share applause, you wondered how many of these players can recover from being part of such a shambles.

Germany’s manager, Joachim Löw, was asked whether he appreciated the historical significance of what had occurred.

“Well, I think I can imagine what it feels like,” he said. “Remember that in 2006, we, in our own country, missed the opportunity to make it to the final. We lost to Italy in the 119th minute. That is enormous for any country. I believe that this defeat is going to be difficult to digest for Brazil.

“In spite of all that, until the match today, Brazil played a magnificent World Cup. As a host, Brazil has organised this World Cup in a sensational way. What Brazil has delivered here is fantastic. Lots of friendly people – the fascination of football. Of course, it is a difficult defeat, painful and difficult to digest.”

Of course, when Germany lost that match in 2006, they turned up at the venue for their next match to find a huge crowd waiting to welcome them and congratulate them for their performance in reaching the semi-final.

Löw explained that his players had sensed panic in Brazil’s ranks, and taken advantage.

“We were able to face up to the deep passion of the Brazilians, we had a clear, persistent game and we said to ourselves, if we are courageous, if we are aware of our own strengths, we will win this match. But that result was not to be expected.

“It was for the host a great shock. You realised after the 2-0 that they were confused, that they never got back to their original organisation. We were extremely cool, and took our chances. We realised they were cracking up and took advantage of it.

Löw reminded his players not to get carried away, since there was something rather unusual about a game in which Germany ran in four goals in a six-minute spell in the first half.

“In this phase where two or three goals were scored, we were lucky that the host was no longer that well-organised and was shell-shocked. So now we have to be humble and prepare well for the final.”

Toni Kroos, who scored twice in two minutes in the first half and was named man of the match, echoed his coach’s message on both points: Germany had taken advantage of Brazil’s psychological fragility, and their only thoughts now are for the final.

“I guess it was a very impressive match,” Kroos said. “From minute one we had the impression something big was possible. We realised that the Brazilians were a bit upset, they were not so clear in their actions. We took advantage of the possibilities and scored one goal after another. We sometimes had problems believing just a few minutes in the first half it was 5-0. We played an outstanding match.”

Kroos assured the press that he and his team-mates would not get carried away.

Kroos admitted he felt sorry for the beaten Brazilian players.

“Yes, naturally. In normal circumstances the difference would not have been as big as it was today. Of course they have great players. And they had, of course, the higher pressure on their shoulders. We also have a load on our shoulders, but theirs’ was bigger.

“We thought throughout the tournament that in no match so far did they play to their top potential. Today, we did not allow them to get into a rhythm where they could be dangerous. But they have great players, and they will come back as a team.”

Before the Germans spoke about the apparent psychological vulnerability of Brazil, Scolari had rejected suggestions that his management of the team had led to them being too hyped up and emotional as they took the field.

“No, no no. Let’s not try to find an excuse – Neymar, emotions, the anthem, no. What happened is exactly what I told you. Germany, at a given moment, imposed a fantastic rhythm. They were able, in two or three moments, to score the goals that defined the match. Nothing to do with Neymar, walking in together, the anthem or anything like that.”

At one point Scolari exasperatedly cut off a journalist who wanted to know why he hadn’t made tactical changes when things were going off the rails in the first half.

“Let me explain something to you, then you can continue your question. When were the goals scored? 23, 24, 25, 26, 28 minutes? In such a space of time, nobody is going to change anything. It was one after the other. I think everyone blanked out. We were trying to talk to them, to get organised, to stop the goals going in, but it was a spell of pressure when everything worked out for Germany. There was nothing we could do to change it at that point.

1 Worst sporting moment: White knuckle ride on a hate-filled night at Windsor
2 Rugby to return in England with rucking but no hugging
3 Acute disillusionment the only response to growing FAI debacle
4 Worst Sporting Moment: Mighty Nijinsky misses moment of triumph
5 Irish roots with the bit of Jo’burg dog: Curtis Campher has arrived
Real news has value SUBSCRIBE
Crossword Get access to over 6,000 interactive crosswords