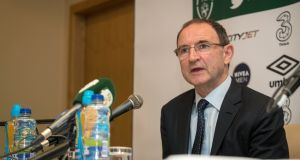 Robbie Keane is set to follow Shay Given into international retirement, after Republic of Ireland manager Martin O’Neill confirmed the team’s captain is to make a formal announcement on his future.

Speaking in Clonmel today ahead of the FAI’s AGM tomorrow, O’Neill indicated Keane won’t be available for the World Cup qualification campaign which kicks off in Belgrade against Serbia on September 5th.

The Dubliner, 36, won the last of his 145 caps as a substitute in the Euro 2016 last-16 defeat to France four weeks ago and it remains to be seen whether he’ll feature in the friendly against Oman on August 31st as a farewell to the home crowd following an 18-year spell at international level that included a record haul of 67 goals.

He said: “Robbie will make an announcement pretty soon. I’ll leave it to him. He has some time left with LA Galaxy and it might be a case of concentrating on that so I’ll let him speak.”

Given bowed out of international football for the second and last time on Thursday evening, with O’Neill thanking the Donegalman for the contribution he made after coming out of retirement two years ago.

“Shay is a fantastic player and goalkeeper, not only for Ireland but also proved his worth at Premier League level, week in week out,” said O’Neill.

“You only have to listen to some of the great players who played with him to see how much he was thought of.

“I’ve no issue with him retiring a second time. After the Euros in Poland four years ago, where he was maybe not fully fit, he didn’t want to leave the international scene in that manner.

“He persuaded himself to come back and I’d no problem with that. Who knows what might have happened if it wasn’t for the injury against Germany (last October)

“He’s proven himself not only as a great player on the field, but the encouragement he showed for us in the Euros. He wanted to play, he was ready to go, but his encouragement to Darren Randolph was second to none.

“I’ll miss him from that viewpoint. He’s got another year left with Stoke and he wants to focus on that. He told me his decision a few days ago and I appreciate that.”

Meanwhile, the intrigue surrounding the contract renewals of O’Neill and his assistant Roy Keane rumbles on.

Although both the FAI and O’Neill insist the deals have been agreed, successors to the current contracts which expired after the Euros have yet to be finalised.

“It (the contract) is ready for signature,” said the Derryman who arrived in Tipperary on Thursday to help the FAI conduct some of their Festival of Football events. “There’s not a problem, I never know what the fuss is about.

“This is my first opportunity to get over. I’m away tomorrow but then I’m back in next week when I hope to see some of the European (club) games.”