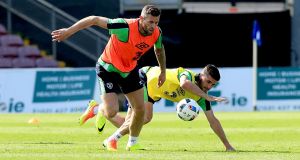 The percentages he is apt to quote have varied a little bit from day to day but Martin O’Neill was a little less certain of his final 23-man squad after a training session at Turner’s Cross yesterday. Robbie Keane was forced to watch from the sidelines and Harry Arter limped out of with a thigh strain.

James McCarthy trained away from the main group and looks to be progressing well but Kevin Doyle’s chances of making it to France shrank to more or less zero when the manager told him he could stay in the United States, where he is now officially on standby, rather than to travel for tonight’s game against Belarus in Cork.

O’Neill talked about the possibility of a late call-up for the Wexfordman in the event that Keane is deemed unfit to travel. But the captain’s withdrawal would be far more likely at this stage to resolve the lingering doubts surrounding David McGoldrick’s place in the travelling party.

“I wouldn’t start jumping to it yet, we’ll see how he is,” said O’Neill, however, after the session which was opened towards the end to a couple of hundred local fans. “As Robbie says himself he’s a pretty quick healer. We will see how the injection settles it down. He was never going to train today and he wouldn’t play tomorrow but obviously, he would have been coming with us, definitely, as the captain of the side. We want him to be there.”

Keane himself suggested that he was okay as he departed but O’Neill seemed uncertain about the situation in the various interviews that he did, giving the impression that if the striker’s availability to actually play was going to seriously undermined then he might well have to look at alternatives.

In the worst case scenario, the injury might actually mark the end of the Dubliner’s international career although that is certainly a prospect that the 35-year-old will be out to avoid.

Arter, meanwhile, was being brought for a scan from the training session and O’Neill said it was far too early to say whether the problem was a significant one although the player appeared to be in some bother with it as pulled out of the training session.

If he was to be ruled out then the midfield equation would become a little bit less complex although there would still be a few options for the manager to choose from and a couple of players due to get some bad news immediately after the game.

O’Neill has tried to give everybody the opportunity to make their final cases, using 31 players in just three games this year, five more than in nine over the whole of 2015.

But there are some difficult calls still to be made by a manager aiming to strike a balance between the team’s needs over the course of the group stages and, potentially, beyond and the sense that some of those who have contributed a lot over the course of qualifying are owed some loyalty.

Former Cork City player David Meyler is one of those hoping to make the cut and while Daryl Murphy is the only confirmed starter for this evening, the 27-year-old will play some part in a game against a Belarus side that includes several members of the Bate Borisov side that beat Dundalk last summer on the way to the Champions League group stages as well as Aliaksandr Hleb, the former Arsenal and Barcelona star.

Meyler ould welcome the chance to feature but acknowledges that performances over the course of the campaign are bound to play a big part in shaping the manager’s final call.

“I’ve done my share,” he said, “but I think everybody has, throughout the campaign, we’ve all done our piece. So the manager has to pick the 23 players he feels will do the country the best in France.

Asked if he is worried about missing out at this stage, he replied: “I’m more of a glass half-full kind of guy but everyone is going to doubt themselves at moments. But for the meantime, we’ve one game, that’s all we can focus on and can’t look any more forward than that. I’ve got to make sure, if I’m playing, that I do my job.”

O’Neill believes the game can be of use even if there is the potential for other problems to arise before he has to submit the squad list to Uefa just before 11pm Irish time.

“Regardless of what happens, you’re going to run the risk of somebody getting injured but by the same token I need the likes of Meyler and Murphy and some of the others here to play. I want it to be a game that we get something out of as we did do the other night. . . . I want us to play well obviously.”