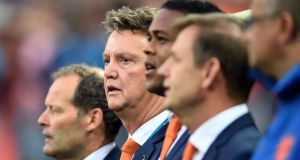 Traditional Dutch frailty in penalty shootouts again proved their Achilles heel when they lost 4-2 on spot-kicks to Argentina after a goalless World Cup semi-final.

Netherlands’ coach Louis van Gaal was forced to use defender Ron Vlaar as his first penalty taker and he was also left to regret being unable to send on his expert spot-kick saver Tim Krul for the shootout.

“I asked two players to take the first kick before deciding on Vlaar because I thought Vlaar was the best player on the field and I thought he had a great deal of confidence,” Van Gaal told reporters.

“But it goes to show, when push comes to shove it is not easy to score a penalty kick. Everybody knows that.”

Van Gaal did not name the other player he had asked to take the first kick, a task handed in the quarter-final win over Costa Rica to striker Robin van Persie who was substituted in extra time against Argentina.

Arjen Robben and Dirk Kuyt scored their penalties but midfielder Wesley Sneijder also missed while the Argentines converted four out of four to reach Sunday’s final against Germany.

The Dutch have now lost two out of three penalty shootouts at World Cups as well as three out of four in European Championships.

“When you take one you have to score and that didn’t happen, so it wasn’t good enough,” Vlaar said. “I would never walk away from my responsibility. I wasn’t nervous, I was focused. But it must go in and it didn’t.

“It’s tough, but that’s what sport is about,” he added. “It really hurts, a dream which gets put out.”

Van Gaal also rued the fact he could not use substitute Krul in the shootout as he did so successfully against Costa Rica.

First-choice Jasper Cillessen had failed to stop any of the 13 penalties he has faced in his professional career and that number increased to 17 yesterday.

Krul made two fine saves in the shootout against Costa Rica but Van Gaal had used all three substitutions against Argentina so Cillessen had to stay on the field.

“If I had had the opportunity to substitute Jasper I would have done that but I had already used three substitutes so I couldn’t do that,” the Dutch coach told reporters.

“I thought it was necessary to get Van Persie out because he was on his last legs,” he added. “My feeling was that (Klaas-Jan) Huntelaar would make the goal.”

Argentina keeper Sergio Romero emerged as his team’s hero by saving two of the four Dutch spot-kicks and he is a player Van Gaal knows well.

“The penalty series is always a matter of luck,” the Dutch coach said. “And, of course, I taught Romero how to stop penalties so that hurts.”

Van Gaal brought Romero to AZ Alkmaar in 2007 when he was coach and although he later said his comments were made in jest his hurt was evident.

“It is the most terrible scenario to lose on penalties at the very least we were the equal party in the match if not the better team so that of course is a big disappointment,” he said.

1 ‘A radical departure’: Who are CVC and what are their aims with rugby?
2 Ger Loughnane and the spark that lit Clare’s hurling revolution
3 Ken Early: Champions League has stolen international football’s clothes
4 Connell losing touch with club championship is real tragedy of Normal People
5 Shane Ryan: Shark attacks and gruelling shifts on a Covid-free Atlantic mission
Real news has value SUBSCRIBE
Crossword Get access to over 6,000 interactive crosswords