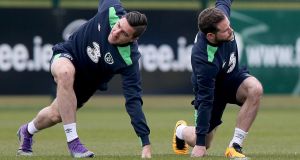 Alan Judge, Rob Elliot and Kevin Doyle are all likely to get starts over the coming week to allow them to strengthen their case for a trip to Euro 2016.

But Harry Arter may miss out on the chance of a debut against either Switzerland or Slovakia after sitting out training in Abbotstown yesterday with an Achilles strain.

The Bournemouth midfielder came off at half-time in his club’s heavy defeat by Tottenham on Sunday and was still struggling with the strain when he arrived in Dublin. Manager Martin O’Neill suggested that he would give the 26-year-old the chance to shake it off before making any firm decisions on whether to start him in one of the games as intended.

But it is possible the midfielder may have to rely on his club form and perhaps a solitary international appearance against the Dutch in May in terms of his case for Euro 2016 inclusion.

“Robbie came off with a shoulder injury and he said it was very, very sore but he has had some scans today and they are negative which is good,” said O’Neill after a later than originally scheduled training session at the FAI’s headquarters. “He is feeling some bruising but it’s pretty decent.

“Harry is different, he came off his match with a bit of an Achilles problem which he has had for a little while. We will have another look him. He is obviously desperate to get in involved in the squad but we will have a look at it again later on.

“If he is fit, he would start one of the two games,” he added. “If he is not then that would be a bit unfortunate.”

Judge seems virtually certain to get his first outing as a senior international over the course of Friday or Tuesday with the Brentford midfielder having previously made the bench for Ireland’s first playoff game against Bosnia and Herzegovina.

“He has shown enough in the games for Brentford over the last year that it would be nice to give him a go.”

Doyle too will be given “a go”, something the manager says should be considered “an opportunity” for the 32-year-old although the northerner acknowledges that with only one confirmed game to come after these two prior to France and several players bound to be disappointed, that anyone on the margins could do with pressing their case.

“We’re getting to the stage where, after these two games, the next opportunity that we get to have a get-together is a few days before we play Holland so time is pressing. Daryl Murphy has got ahead of him (Doyle) at the moment but listen, Kevin’s got a bit of spirit about him, he’s a nice lad so I think he’ll want to take this chance.

“I don’t think he’d be all that happy to think that he’s actually on trial having done something in the game himself. I think it’s more of an opportunity, I’d use that word: an ‘opportunity’ for him but if it meant that you had to really, really play strongly in this period of time that you get on the field either to prove to me or to yourself that you’re worthy of a pace then, you know. . . If that’s putting a bit of pressure on people I’ll have to deal with it.”

O’Neill did say, however, that it is increasingly likely that the members of the squad who take part in the training camp at Fota Island will have some sort of additional game lined up for them in Cork.

Cork City being involved wasn’t ruled out although it seems unlikely given that John Caulfield’s men face Dundalk at home in the league that Friday night. “Going into the matches you might need that extra game. We will definitely be going 11 versus 11 (in training), regardless of whether we can organise it or not. But if we can organise it then it will be definitely down in Cork,” said O’Neill.