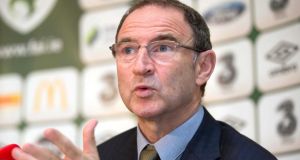 Martin O’Neill: “You might say ‘it’s only Gibraltar’, but for me I have to really focus on that game before Germany. Take your eye off it and you find yourself in a bit of trouble.” Photo: Morgan Treacy/Inpho

A month ago he named a 36-man provisional squad for the games against Oman and Georgia. Yesterday at Abbotstown Martin O’Neill raised the number by one for next month’s qualification fixtures at home to Gibraltar and away to Germany.

“I think the only player missing from the last 30 years would be Paul McGrath,” he said of his panel. “I’ve dug just about everybody up, trying to keep them happy. In fact, I think I’ve excluded a couple of people who have just died.”

Plenty of living options, though, before O’Neill trims the squad closer to the games. The only changes from last month’s initial selection is the loss of Joey O’Brien through injury, the return of Paul Green after a foot problem, and the inclusion of Shay Given from the start after he had been added to the provisional squad once he made himself available again for international duty.

“I haven’t spoken to Mark Noble. I’ve said umpteen times if people want to show willingness to come and play for us, that is absolutely fine by me, I’m not going to chase it. I won’t be chasing him.

“I saw where he said he was disappointed with not getting in the England squad. That’s absolutely fine, no problem. He said he wanted to take his time, or something.

“Mark is a fine player, but I’ll just reiterate: I’m not chasing him. People have to come to me at some stage, you know.”

McGoldrick call-up A more likely call-up in the near future is English-born Ipswich striker David McGoldrick. “We’re chasing that up at this minute,” said O’Neill, “I think there’s a genuine (Irish) connection.

Aston Villa teenager and Republic of Ireland under-21 Jack Grealish is another young player on his mind, although, like Noble, his intentions at senior level are as yet unclear.

What about the Birmingham-born player’s claim that Hull City’s Stephen Quinn called him a “fake Paddy” in a recent encounter? O’Neill wondered if it was “a tongue in cheek remark”.

“I would be a wee bit surprised if he had said it. But, you know what? If he’s going to annoy a young player who might play for us, and that causes him not to play, it’s not too late to leave Quinn out of the squad.”

For now, all thoughts are on the upcoming games, and certainly not on six years away.

O’Neill was asked if Ireland being granted hosting rights to four Euro 2020 fixtures made him eager to be at the helm when they come around.

(Then, a quick commentary on what he judged to be the absence of sartorial elegance among the press pack.

“You come so slovenly. There’s me dressed like a king. I’m not going to dress for the occasion any more. I’ve come here today, I’ve put on my best suit, I’ve got a little rub of aftershave, I feel the business. You . . . ” The hurt.)

Keane memoirs Less of a distraction, he trusts, will be the publication next month of his assistant manager’s autobiography. “If he’s giving dog’s abuse out, I’ll just dump him. Send him on home. I’m only having a joke.”

He’s only ever read one footballer’s life story – that of his favourite player as a child, Ferenc Puskas. Will he read Roy Keane’s book?

“Well, it’s his second autobiography,” he smiled. “Will he not join Wayne Rooney in having as many autobiographies as you want? People who have more than one, well, they must have a couple of lives.”

Back to more pressing matters and two wildly contrasting opponents in the space of four days, the most diminutive of minnows, followed by the world champions.

“You might say ‘it’s only Gibraltar’, but for me I have to really focus on that game before Germany. Take your eye off it and you find yourself in a bit of trouble. Yes, we should beat Gibraltar, but we need to be able to open them up, we need to have some creative players on the field.”

So, will Wes Hoolahan feature in your thinking? “Yeah, yeah, absolutely, yeah.”

1 Gordon D'Arcy: I know what Joe and Cheika would do. Fix the basics
2 Darragh Ó Sé: Cork and Donegal went out with the wrong attitude
3 Can Solskjaer’s Man United find their groove when it matters?
4 Simon Easterby admits Ireland may need to take new line on maul
5 Gerry Thornley: Ireland don’t want to box themselves into a corner
Real news has value SUBSCRIBE
Crossword Get access to over 6,000 interactive crosswords