Northern Ireland bounce back against Czechs

Friendly win provides a tonic after late defeat against the Netherlands 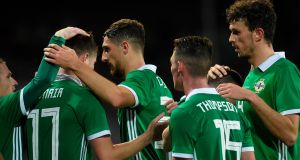 Northern Ireland achieved what England could not as they beat the Czech Republic in Prague on Monday but they had to cling on as the hosts threatened to come back from three goals down.

The Green and White Army’s first friendly victory away from home in 13 years was a dramatic one as Paddy McNair’s brace, either side of a Jonny Evans strike, had them in charge before Vladimir Darida and Alex Kral struck two in two minutes to set up a nervy finish.

Michael O’Neill’s side hung on, though, to put the heartbreak of Thursday’s late defeat to Holland behind them and poop the party of the Czechs, 2-1 winners over England on Friday.

It was Northern Ireland’s first friendly win on the road since they beat Finland in 2006, a run of 22 games in which they had scored only two goals.

O’Neill made clear his intention to mix things up after back-to-back qualifying defeats as he turned to a 3-5-2 formation, with Tom Flanagan joining Evans and Craig Cathcart in defence, while Liam Boyce and Gavin Whyte spearheaded the attack.

It looked the perfect decision as Northern Ireland waltzed through the first half with 45 minutes of almost complete dominance.

McNair started it in the ninth minute, charging on to Boyce’s low cross and skipping past a defender before striking across Jiri Pavlenka.

Czech coach Jaroslav Silhavy had made sweeping changes to his side, retaining only Kral from Friday’s starting XI, and it showed in a disjointed performance.

They played into the hands of the high press Northern Ireland used to disrupt Holland last week as they tried to pass out from the back, with wayward balls almost playing in first Boyce and then Stuart Dallas.

And when they gifted Northern Ireland a corner, they found themselves 2-0 down.

McNair’s delivery caused chaos in the Czech Republic box. Flanagan’s effort was blocked but the ball fell for Evans who fired into the roof of the net.

Seconds later Whyte met a fine ball from Jordan Thompson but was denied from close range.

The hosts were on the ropes but responded with their best chance of the half, Kral pulling the ball back for Michael Krmencik, though his first-time shot span just wide of the post.

And it was only a temporary reprieve as McNair struck a third five minutes before the end of the half.

Steven Davis spotted his run and played the ball from well inside his own half, and the Sunderland man outsprinted Josef Husbauer and Ondrej Kudela before rounding Pavlenka and slotting home.

Silhavy had seen enough and made four changes at half-time and it worked as the game completely changed with Northern Ireland pegged back for long periods.

Michael McGovern needed two attempts to gather Ladislav Krejci’s shot before the goalkeeper came charging off his line in pursuit of a deep ball, missed it, and was grateful to see Husbauer’s lobbed effort go wide as he picked Evans up off the floor.

But they were back in it the 67th minute when Darida’s rising shot through a crowded box was too hot for McGovern.

And before Northern Ireland could draw breath, Kral strode forward and hit a second into the bottom left corner of the net.

That set up a nervy finish as Northern Ireland put their bodies on the line, making a series of blocks to frustrate their hosts.

As the game moved into stoppage time, McGovern gathered Kral’s header on the line before being bundled over it in a minor melee, but the referee quickly intervened and Northern Ireland’s victory was safe.

1 Tour de France: Every yellow jersey winner must feel guilty by some association
2 Kevin Babington: Learning to live again after life changed forever on Long Island
3 Sam Bennett: ‘A green jersey in the Tour de France is such a highlight of my career’
4 Matt Williams: The sky is not falling in on Irish rugby - but Ireland do need a new plan
5 Aidan O’Brien’s Serpentine could be supplemented for the Arc
Real news has value SUBSCRIBE
Crossword Get access to over 6,000 interactive crosswords