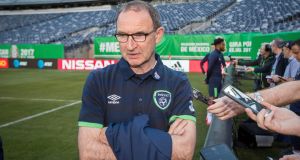 Ireland manager Martin O’Neill speaks to the media after the game at the MetLife Stadium in New Jersey. Photo: Ryan Byrne/Inpho

Martin O’Neill insisted that he was happy with the opportunity the game against Mexico had given his players even if the result and aspects of the performance were ultimately disappointing.

The Ireland manager said that fitness was a major factor in deciding the game and Mexico had deserved their win but the outing, he seemed sure, would stand to his players as they move towards the World Cup qualifier on Sunday week.

“In terms of our preparation for the main game against Austria I thought it was excellent,” he said. “Mexico were very good; they were good on the ball as befits a side like that. I thought it was a great workout, a great exercise for us.

“Quite a number of our players have not played football for quite considerable amount of time. Mexico dealt with the ball very, very well and I thought they were much fitter than us.

“There are some (Irish players) who haven’t played for their club for a considerable amount of time. I think that showed greatly but we’ve got the game on Sunday and we’ll see how they come out of that. In terms of getting 90 minutes, that was great for (Shane) Duffy and if he’s come out of unscathed all the better.”

O’Neill seemed to acknowledge that the formation had been an issue for his players with Ireland’s best spell coming towards the end when he switch to four at the back and just one up front but he insisted that had no regrets, arguing that this was a good time to try new tactics.

“We have to try it, that’s the whole point; that’s what I said in the last two or three days, let’s have a look at it, because we might have to do it at some point in our World Cup campaign, we might have to change systems.

“You are disappointed to concede goals at any given stage. But what can we learn from the game? I think a great deal. You can play any number of systems but you have to deal with situations.

“Mexico played much better than us, they deserved to win the game. But as far as I’m concerned, it was great; I was delighted to take it on and I thought it was great preparation.”

O’Neill handed senior debuts to Kevin Long and Alan Browne and first starts to the likes of Daryl Horgan and Callum O’Dowda but Stephen Gleeson will remember getting on to score his first international goal for some time to come.

“It was a proud night,” he said afterwards. “I don’t think the performance was great but on a personal level it’s great to get a goal but I think all the aim is for Austria a week on Sunday. We’ll take the few positives that came out of it and go over the game again and hopefully for a week on Sunday we’ll be ready.”

Gleeson came into things at a time when Ireland were losing badly and says the message from the manager was clear: go and try to change things.

“It’s the same with every international friendly, a lot of changes are made and you just want to go on and try do something on the pitch. Luckily, it fell for me and I could score. I thought the boys that came on tried to get on the ball and tried to do what they were brought on to do. He said to try and get a bit of passing going and get a bit of shape to the team. We were 3-0 down at the time so it was great to get on the pitch again.

“It was a tough night but as I said, personally it was a good one.”

1 Worst sporting moment: White knuckle ride on a hate-filled night at Windsor
2 Shane Lowry right in the mix at Wyndham after brilliant 63
3 Acute disillusionment the only response to growing FAI debacle
4 Sonia O’Sullivan: Russian Affair lays bare one of sport’s greatest scandals
5 Irish roots with the bit of Jo’burg dog: Curtis Campher has arrived
Real news has value SUBSCRIBE
Crossword Get access to over 6,000 interactive crosswords