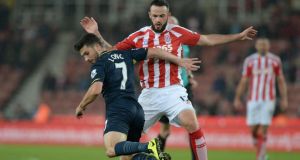 Republic of Ireland manager Martin O’Neill could be without both centre back Marc Wilson and midfielder James McCarthy for next Friday’s Euro 2016 qualifier against Scotland in Glasgow after they both picked up hamstring injuries in Sunday’s Premier League programme.

Wilson limped out of Stoke’s 2-1 Premier League victory over Tottenham at White Hart Lane after 25 minutes and was replaced by Spanish defender Marc Muniesa.

McCarthy played all 90 minutes of Everton’s 1-1 draw away to Sunderland, with his late heroics ensuring a point for the Toffees thanks to a goal-line clearance.

Everton boss Roberto Martinez is worried that the injury is similar to a recent one picked up by McCarthy, but will wait until the player is assessed on Monday.

“We are going to assess James. He was feeling his hamstring towards the end of the game but he wanted to stay on the pitch because we had used all three subs.

“It is a bit of a concern because he had the same injury a few weeks back when he missed the game against Manchester United and it is in that area. We are hoping that it is more fatigue than a soft tissue problem.

“We will assess him in the morning.”

’Neill is set to name his final squad later this evening from the 36-strong provisional list named for the Scotland game and the friendly internationals against the USA.