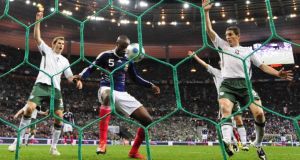 FAI chief executive John Delaney has claimed the potential legal case it had against Fifa in the wake of Ireland’s controversial defeat by France in a World Cup play-off in Paris in November 2009 was based on factors other than the refereeing error that allowed Thierry Henry’s handball to go unpunished.

Fifa gave the FAI a €5 million “loan” in the wake of the playoff defeat. The FAI also secured an additional €350,000 grant from the governing body.

Delaney made the claim last night at the same time as the association released documents – including what appears to be the main agreement between the two organisations – that contain only references to the handball incident. The other concerns Delaney now suggests were the basis for the supposed legal case are not mentioned in the documents.

In an interview on RTÉ television, Delaney said that the decision by Swedish match official Martin Hansson had merely been the “catalyst” for what followed.

The FAI first sought a “sporting solution” – an extra place at the finals or a replay – and then compensation.

He says the money obtained from Fifa was on the basis of “real concerns” over the strength of the association’s legal claims. Delaney says the claims were based on a decision taken by Fifa in the weeks before the two games against France to seed the draw for the play-offs. This, he says, was essentially a rule change.

Delaney also cited the “reputational damage” caused to the FAI by Sepp Blatter mocking the “33rd team” suggestion in the aftermath of his first meeting with Delaney.

In his interview, Delaney repeatedly pointed to a copy of the document and said that Fifa’s “very real concerns” regarding the potential of the legal case are “laid bare for the world to see”.

However, the only complaint listed in the documents is that the handball resulted in a goal which contributed to Ireland failing to qualify for the finals. Neither the seedings nor Blatter’s behaviour are mentioned anywhere in the document.

Roughly a third of the document is taken up with the terms of a confidentiality agreement between Fifa and the FAI. Among other things, the FAI is prohibited from revealing the contents of the “deal” even to its own professional advisers.

A “loan agreement” referred to in the document has not been released.

It is unclear why Delaney now claims the basis for any proposed legal action was different to what is outlined in the document. The document between the associations only says the FAI “lodged certain requests based on the match and its subsequent failure to qualify for the final competition”.

The suggestion that a legal threat was based on a refereeing error has generally been met with derision over the last couple of days.

The agreement states that the FAI “is now willing to irrevocably and unconditionally accept the decision of the referee as final” and to waive all claims related “to the match and its subsequent failure to qualify”.

Most of the other documents released last night are brief bank records showing the transfer of funds to the association’s account and from there to a stadium-related account. In its statement, the association says that it repeatedly lobbied for a writedown in the loans.

The last document is a letter from Fifa deputy general secretary Markus Kattner to Delaney confirming that the loan has been written off due to Ireland’s failure to qualify for the 2014 World Cup.

It is dated June 13th of last year. One month later the story was leaked to the Sun.

Delaney also acknowledged in last night’s RTÉ interview that most of the money from Fifa only appears in the association’s accounts under global headings and that no indication is given of where the money came from. This is because of the confidentiality agreement, he said.

1 Georgia and Fiji in line to join Six Nations sides in eight-team tournament
2 Ken Early: Another Mourinho masterclass in going through the motions
3 Stephen Scullion: ‘Athletes will do long-term serious damage chasing those results’
4 Malachy Clerkin: Sleep well Jack, you made us all happy
5 The Offload: All eyes on Leinster’s academy intake
Real news has value SUBSCRIBE
Crossword Get access to over 6,000 interactive crosswords