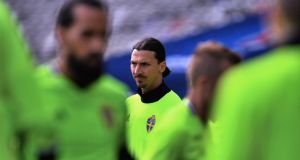 Sweden striker Zlatan Ibrahimovic during a training session in Toulouse ahead of Friday’s meeting with Italy. Photograph: Vassil Donev/EPA

“Ibra has played seven seasons in Serie A,” says, er, Ibra as Sweden prepare for this afternoon’s game in Toulouse, “and feels a great love for the country. It’s my second home.”

Incredibly, the former Juventus, Inter and Milan star won Serie A titles at all three clubs and even if the two in Turin were subsequently discounted, Antonio Conte and his players will be even more keenly aware than most heading into this game just what an impact the striker is capable of making on the day.

Monday wasn’t really one of those but the Italians will remember the one in Euro 2004 when his remarkable back-heel strike late on marked the beginning of the end for the Azzurri and their then manager Giovanni Trapattoni.

This time, not even a defeat would necessarily knock the 1968 champions off the course they have set for the second round but a point would all but put them through and it would be something of a surprise if they couldn’t manage that given the respective performances against Ireland and Belgium last time out.

The Italians comprehensively outplayed the group’s top seeds, winning 2-0 thanks to a string of strong performances and an absolutely standout one by centre back Leonardo Bonucci. Conte has sought to deflect the praise that has heaped upon him since towards his players.

“We put in a good performance against Belgium,” he says, “and I was happy with what I saw from the players but we also know we haven’t done anything.”

Conte must be tempted to stick with the team that won so well although there is a sense that Mattia De Sciglio might replace Manchester United’s Matteo Darmian on the left and Alessandro Florenzi has a shot of replacing Antonio Candreva or Monday’s other goalscorer, Emanuele Giaccherini.

Erik Hamren’s options are somewhat less appealing but the need to shake things up is far greater and so Marcus Berg and Oscar Lewicki look set to make way for John Guidetti and and Albin Ekdal.

1 Sligo meeting abandoned after four races due to safety concerns
2 A new putter for Tiger Woods is something worth noting
3 The game they loved so well: How cricket united Hume, McGuinness and McCann
4 Nicola Sturgeon ‘furious’ as players’ pub trip sees Aberdeen game postponed
5 Brain as well as brawn on Sexton’s lockdown menu
Real news has value SUBSCRIBE
Crossword Get access to over 6,000 interactive crosswords