Ireland to play Qatar in Hungary on March 30th 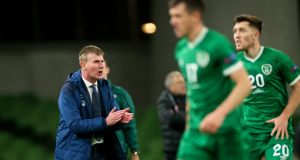 Ireland will travel to Hungary at the end of this month in order to play Qatar after the associations received the go ahead from Uefa to reverse the order of their two scheduled games due to the practical problems created by the coronavirus pandemic and the associated travel restrictions.

The FAI announced on Monday that instead of hosting Qatar here on March 30th, as had been anticipated, the two sides will play each other in the Hungarian city of Debrecen where the Qataris will base themselves for the entire international window.

Qatar, who have been attached to Ireland’s World Cup qualifying group in order to help them prepare for a World Cup they will participate in as hosts, will now visit Dublin on October 12th by which time, the association here hopes, a significant number of spectators will be allowed in the Aviva stadium to watch the game.

The changes leave Stephen Kenny and his squad with a second trip away in this month’s international window, which kicks off with an away game against Serbia then one at home to Luxembourg, something that he and the players probably could have done without but the prospect of an additional game in Lansdowne Road at a time of the year when things should be a little closer to normal will be welcome.

The Qataris had intended to base themselves in Vienna and to play both Luxembourg and Azerbaijan there before travelling to Dublin but as Austria is now on the Government’s list of Category Two countries, the need to quarantine after arrival in Ireland would have been a major issue with both Qatar and Luxembourg affected.

Qatar will now play all three games in Hungary and the trip to Dublin will follow Ireland’s group game in Azerbaijan.

“With the ever-changing situation in relation to travel restrictions around COVID-19 and Qatar’s agreement to move their matches out of Vienna, we have now ensured that the first home World Cup qualifier will take place in Dublin against Luxembourg,” said a spokeperson for the FAI in a statement.

“It has also been agreed by all concerned to reverse the Qatar fixtures and play Qatar in Debrecen this month and welcome them to Dublin in October when it is possible that we will have Ireland fans at the game as the battle against COVID-19 continues.”

Ireland kick off their World Cup campaign in Belgrade on March 24th with Kenny due to name his squad on Thursday week (the 18th).