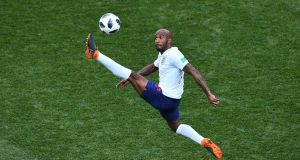 Harry Kane praised his team-mates for the professional manner in which they dealt with Panama as they cruised to a 6-1 victory to qualify for the last 16.

Kane scored a hat-trick, including two penalties, as England joined Belgium on six points from two games to ensure both countries advanced from Group G.

John Stones scored twice while Jesse Lingard also got on the scoresheet along with Kane, who joins Geoff Hurst and Gary Lineker as hat-trick heroes for England in World Cup finals.

Kane was delighted with the way his side advanced from the group with a game to spare and was happy to see the work they have done on set-pieces pay off against Panama.

“It’s a brilliant result, fantastic to be through and to do it in this way is brilliant.”

It was a game England were expected to win, but to do so in such an emphatic manner will surely increase expectation levels for the rest of the tournament.

Kane is happy for supporters to dream of success on the world stage but he knows there is a long way to go if he is to lift the trophy on July 15th.

“There’s still a long way to go and a lot of hard work to go but we’ve just got to stick together and keep to our game plan and that’s the most important thing.”

John Stones benefited from England’s set-pieces with two goals from first half corners.

The Manchester City defender had not scored for his country before the game, but he was disappointed to see Panama score a late consolation goal to deny Stones and the rest of the England defenders a clean sheet.

“To score my first goals for England was something special, especially at a World Cup,” Stones said. “It’s not something I thought I’d do at the start of the day.

“But I would have loved a clean sheet, I thought we defended so well and dominated the match and to not get a clean sheet is a bit disappointing.

“It’s something to take forward into the next game and hopefully I can get a few more goals from the set-pieces.”

Ashley Young insists the squad of players will keep their feet on the ground despite the manner of their victory.

“It’s a squad game, everybody’s got to play their part and I think everyone did that today.

“It would be nice for us to be talked about in a positive way and we’ve just got to keep our feet on the ground and keep working hard in training.

“It’s just the start of something good to come but we’ve just got to keep working and look forward to the next game.”

1 Connell losing touch with club championship is real tragedy of Normal People
2 Thuram and Sancho pay tribute to George Floyd after scoring
3 Ger Loughnane and the spark that lit Clare’s hurling revolution
4 Champions League final likely to be moved from Istanbul
5 Ghosts and goalposts: The soul of street football in Dublin’s Gloucester Diamond
Real news has value SUBSCRIBE
Crossword Get access to over 6,000 interactive crosswords