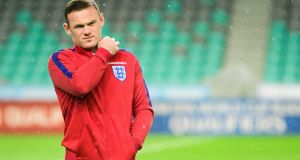 England captain Wayne Rooney walks on the pitch on the eve of the World Cup 2018 football qualification match in Ljubljana. Photograph: Getty Images

England interim manager Gareth Southgate has taken the bold decision to drop captain and record goalscorer Wayne Rooney from the team to face Slovenia in their World Cup qualifier.

Here’s a look at some of the big calls made by previous England managers, and whether they paid off.

The most famous England selection decision, and comfortably the most successful, came when Ramsey kept faith with Geoff Hurst for the 1966 World Cup final against West Germany despite goal machine Jimmy Greaves returning to fitness after being injured earlier in the tournament. With no subs in those days it was the boldest of calls from Ramsey but Hurst’s Wembley hat-trick more than justified it.

Greenwood picked Kevin Keegan and Trevor Brooking, who he called the engine room of his side, for the 1982 World Cup despite both carrying injuries. It backfired as neither were fit enough to play until the final match of the second group stage against hosts Spain. Both came on as substitutes with 27 minutes left but could not make a breakthrough as a goalless draw sent England home.

Hoddle claims axing Paul Gascoigne from England’s 1998 World Cup squad was ‘the saddest thing’ he had ever done. Gascoigne had starred for the Three Lions at Euro 96, where he scored a stunning goal against Scotland at Wembley. But two years later Hoddle felt the midfielder was not in a good enough shape to compete in France and broke the news to a distraught ‘Gazza’ at the team’s Spanish hotel.

Theo Walcott was just 17 years old and had yet to make a Premier League appearance when Eriksson took him to the 2006 World Cup. Walcott now admits he felt out of his depth in Germany — he never made it onto the pitch — while in the decade that has followed, for one reason or another, the Arsenal forward is still to make a start in a major tournament and was left out of Roy Hodgson’s Euro 2016 squad.

Like Hoddle, McClaren took the difficult decision to drop a national hero when he left David Beckham out of his first England squad, saying he wanted to go in a different direction. However, some indifferent performances by the national team saw ‘Goldenballs’ recalled eight months later for a World Cup qualifier against Estonia and the winger went on to collect another 21 caps, taking his total to 115.

Seán Moran: Election fever a reminder of the GAA's fertile political soil 07:00
Navratilova apologises for breaking protocol with protest 06:50
Nike Vaporflys won’t be banned but regulations will tighten 06:39
Gordon D’Arcy: If Farrell can tap into our self-worth, we’re all on a winner 06:15
James McClean: ‘Abuse in the last few games has simmered right down’ 06:00

1 Winds of change as Ireland name a refreshed team, picked on form
2 Gordon D’Arcy: If Farrell can tap into our self-worth, we’re all on a winner
3 Who is Caelan Doris? Meet Ireland’s newest rugby star
4 Ashleigh Barty now living up to all her earlier promise
5 Nike Vaporflys won’t be banned but regulations will tighten
Real news has value SUBSCRIBE
Crossword Get access to over 6,000 interactive crosswords