FAI ‘disappointed’ with Scottish FA over handling of ticket sales 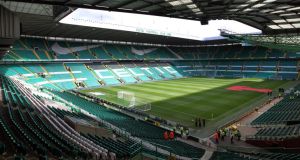 The FAI has received over 12,000 applications for the 3,209 tickets they received for the Euro 2016 qualifier against Scotland at Celtic Park on November 14th. Photograph: Ian MacNicol/Getty Images

The FAI received just over the minimum five per cent away support allocation, with 3,209 tickets in Celtic’s 60,832-capacity stadium.

Over 12,000 applied for tickets to the game, with supporters buying tickets through the Scottish FA website in a bid to see the Group D encounter.

The FAI, which has received complaints from supporters about the distribution of their official allocation, released a statement on Wednesday night that also outlined where the 3,207 tickets have gone.

The statement read: “The FAI received a minimum 5% ticket allocation from the SFA for the away match in Scotland equating to 3,209 tickets. Demand for these tickets is four times higher than the number available.

“The Association regrets that the SFA has not increased this allocation to date. It is particularly disappointing that the Scottish FA is continuing to sell tickets on its website after they had told us that the match was sold out. Many of these tickets are now being taken up by Irish supporters out of desperation, a situation that could be resolved easily by providing adequate numbers of away tickets in a designated Irish section of the stadium.

“Of the tickets confirmed to date, 1,700 went to supporters’ clubs, season ticket holders, Club Ireland members and known away supporters. 700 went to clubs and leagues. The fulfilment of contractual obligations also meant that there were fewer tickets available to the Association to distribute directly for this match – 481 went to Abbey Travel for supporters’ travel packages as per contract (15% of allocation) as official travel partner of the Association, and 128 went to sponsors. The remaining 200 tickets are divided between players, backroom team, FAI staff and team management.

“Although many tickets were provided for known away supporters, the Association recognises that there are supporters who expected tickets and did not receive them. So far, the Association has secured an additional 150 tickets from companies in Scotland for corporate €160 seats that will be given to supporters who missed out at the general admission price of €60. The FAI regrets any situation in which supporters remain without tickets.

“We continue to call on the SFA to provide adequate numbers of seats for Irish supporters, and in the meantime will strive to find remedies for ticketless supporters where possible.”

The Scottish FA replied with a statement of their own that outlined their reasons for not increasing the allocation to away fans.

“The Scottish FA wishes to clarify reports regarding away ticket allocation for the forthcoming European Qualifier against Republic of Ireland at Celtic Park.

“We have fulfilled our obligated allocation of away tickets to the Football Association of Ireland of 3,200, in compliance with UEFA regulations.

“The match is now approaching a sell-out and we are releasing the last remaining restricted view seats via public sale to home fans.

“Given the demand for tickets from Scotland supporters, and the need to comply with UEFA’s safety and security regulations, we will be unable to increase the Republic of Ireland’s away allocation.

“We will have the appropriate measures in place to ensure that both sets of fans – renowned and revered around the world for their impeccable behaviour – enjoy what will be a hugely entertaining qualifying match, played before a full house at Celtic Park.”