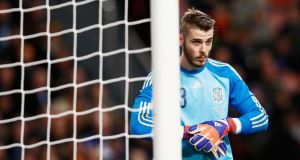 David de Gea should take over from Iker Casillas as Spain’s first choice between the posts at Euro 2016. Photograph: Getty 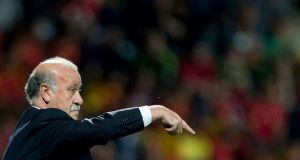 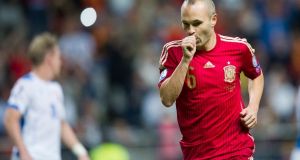 Andrés Iniesta is still one of the most gifted and incisive passer in the world. Photograph: Getty

Vicente del Bosque and co will be aiming to put a disastrous World Cup behind them and rediscover the sort of form that could land them a third straight European title. They certainly have the players. The coach made the headlines recently when he left a string of major stars out of his squad for the final with Juan Mata, Santi Cazorla and Javi Martinez overlooked for one reason or another. Such is the quality in most departments that none is likely to be missed and the only decisions that might be thrown back in the manager’s face relate to the strikers, with Fernando Torres and Diego Costa having perhaps represented safer options than one of two of the ones he chose even if there was no particular reason to expect they would have had big tournaments. As it is, Alvaro Morata looks the most likely player to start up front despite having scored just once in qualifying. Others will have to step up to the mark but if the defence can maintain the sort of form it showed in qualifying when they kept eight straight clean sheets after their opening two games then they really won’t have to score too many to be there or thereabouts. The draw is pretty good for the group winners too, with a third placed side then a runner up blocking the way to the semis.

In a group where Ukraine and Slovakia provided the main competition qualification was always going to be plain sailing for the defending champions. There was one blip - a 2-1 loss away to Slovakia in their second game - but apart from that Spain won every game, scoring 23 goals and conceding just three.

Vicente del Bosque has won the lot with Spain, including the World Cup and the European Championships, but he now has to prove the 2014 group stage exit in Brazil, set-up by a 5-1 thrashing at the hands of the Netherlands, was just a blip. Spain’s golden generation have lost some of their shine but del Bosque still has one of the strongest squads in Europe at his disposal. Lifting the Henri Delaunay trophy is the minimum expectation, but Spain seem to have lost some of the fear factor which saw them win three major tournaments on the spin.

He may no longer have his old mate Xavi alongside him after his departure for Qatar but Andres Iniesta remains arguably the most gifted and incisive passer in world football.   Iniesta has played for Spain at international level all the way from under-15 level. He has 107 senior Spain caps but having only just turned 32 can expect at least another few years of domestic and international success in front of him. When he is on song, Iniesta is mesmeric, and there will be an expectation on him to feed the front men in the same way he used to provide for David Villa and Fernando Torres.

One to watch: David de Gea

It has been a long time coming but the European Championships should see a changing of the guard in goal for Spain. Iker Casillas has picked up a staggering 166 caps for his country but has not been the force of old for some time now and his move from Real Madrid to Porto is testament to this. Meanwhile, De Gea, preferred by Alex Ferguson to Manuel Neuer when the former Manchester United manager was replacing Edwin van der Saar, has established himself as one of the world’s best goalkeepers, and was unlucky not to be number one for the 2014 World Cup. This summer’s championships should see De Gea as Spain’s established as Vicente del Bosque’s first choice.

“The Spanish know how the world works. They sent all the Muslims out of Spain 500 years ago. Don’t tell me the Spanish don’t know what’s what.”