Euro 2016 reflection: We have the new format to thank for Albania’s story 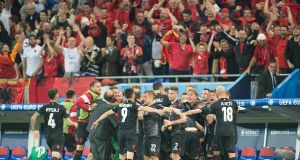 Albania pulled of a famous result as they beat Romania, their first ever win at a major tournament. Photograph: Getty

While accepting Joachim Löw’s argument about the diluted quality of some of the football on display, in particular some of the caution shown by the “smaller” nations, this must be set against the benefits of participation.

Of course Germany would be more worthy finalists than Portugal – and France for that matter – but their absence owes more to a lack of a true goalscoring centre-forward, and Thomas Müller’s waywardness, than the format.

Löw and Mats Hummels argue smaller nations parked buses all around France. Maybe, but it’s a legitimate tactic. France did it too.

And as has been shown by the excitement and interest generated in Ireland by the goals of Robbie Brady and Gareth McAuley, it isn’t all about Germany.

Think of Iceland and what Euro 2016 has done for that country. Or Hungary, what winning Group F might do for their depressed game.

The new format has also allowed Albanians to feel part of things, not just onlookers.

For Albanians and for so many others from “smaller” countries, the highlight was just being there.