James Keddy, the Director of Football at Home Farm FC speaks about the history of the club and their vision for the future. Video: Gareth Maher 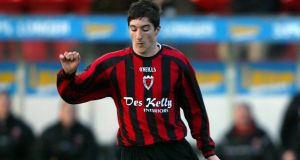 Stephen Ward: played for Bohemians in the League of Ireland after finishing with Home Farm. He later moved to Wolves. Photograph: Andrew Paton/Inpho

Back home on a rare weekend off, Stephen Quinn returned to the place where his love affair with football was first sparked and summarized that the more things change, the more they stay the same.

Braving the chilly morning weather, the Hull City midfielder joined the throngs of parents, relatives, and supporters on the sidelines of a Cherry Orchard schoolboy game in Ballyfermot.

It’s quite a few years since Quinn was one of those energetic youngsters clad in the club’s black and red kit chasing a ball around. Now, he is a local hero having made it all the way to the Premier League and become part of the Republic of Ireland squad.

On this morning, however, he turned up simply to watch his nephew continue the family’s tradition of lining out for the famous Dublin club. Yet, it struck him just how familiar it was seeing so many spectators turn out to witness the next generation of future stars.

He’s right too. Schoolboy football is still big business, although the competition to discover the next Robbie Keane or Jeff Hendrick has never been greater.

When Martin O’Neill’s side takes on Poland this Sunday, it will be 20 years to the day they faced Northern Ireland in a qualifier for Euro 96. In that time, eight managers have used 146 different players with 34 per cent of those being produced by just six Dublin clubs.

Considering soccer is the most played sport around the country, it is quite remarkable that Home Farm, Belvedere, Cherry Orchard, St Kevin’s Boys, St Joseph’s Boys, and Stella Maris have been responsible for supplying 50 players to the Republic of Ireland team over the last two decades.

Stephen Ward isn’t surprised by such statistics. The Burnley left-back is one of 15 players over that period to graduate from Home Farm’s schoolboy sides all the way through to the Ireland team. But it felt like a natural progression for him.

“Where I grew up in Portmarnock, I played with my friends on the local team but there was interest from the likes of Home Farm, Belvedere, and St Kevin’s Boys, and it was really a no-brainer for me to join one of them,” admitted Ward.

“You just had to look at some of the guys who previously played for them and the amount of guys who got trials at English teams to know that it was somewhere to be if you wanted to make it as a professional footballer.”

Interest from scouts of big UK clubs did indeed follow for Ward as he enjoyed trials with Aston Villa and Hibernian, but chose instead to sign for Bohemians in the League of Ireland in order to complete his Leaving Cert. A few years later, Wolves came calling.

While Ward may have taken a slightly different route to the top, he is adamant he would not have been able to amass 29 senior caps and over 100 Premier League appearances without the years spent at one of Dublin’s elite schoolboy clubs. It was the making of him.

Every year hundreds of youngsters with dreams of following a similar path scrap for a chance to be deemed good enough by one of those famous Dublin institutions. Most are turned away and that is often their first experience of the bitter taste of rejection.

“You get top-class coaching, support from everyone around the club, all the best kit, and you’re part of a team that expects to be competing for trophies. Right from the start you are made to feel like a professional and that’s invaluable.”

One prominent scout revealed that they still give “around 70-80 per cent focus” to the six main Dublin schoolboy clubs because “if you want the best, you have to shop at the best place”.

“You just knew that by being at somewhere like Cherry Orchard that you were always in the spotlight that bit more,” said Quinn. “And that’s clearly still the case.”

1 Gonzaga shock Blackrock for historic Leinster Senior Cup win
2 Saudi wealth fund close to buying Newcastle United in €400m deal
3 David Clifford sends everyone back to their corners unbeaten
4 New-look Waterford defy sluggish start to see off Cork
5 Kilkenny give an early glimpse of their power to see off Dublin
Real news has value SUBSCRIBE
Crossword Get access to over 6,000 interactive crosswords