Conor McLaughlin the underdog in a team of underdogs

Having, against all the odds, qualified for Euro 2016, Northern Ireland find themselves in a daunting Group C with Germany, Poland and Ukraine, how will they fare against some of Europe's most feared attackers? Ken Early reports. 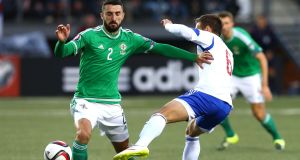 They were in Pescara on Italy’s Adriatic coast. It was the 74th minute of the last game of the Group C qualifiers for the Brazil World Cup. Italy had had already qualified as group winners; Northern Ireland were already assured of finishing fifth of six.

It had been disappointing again and this was to be Worthington’s last match as manager. The Irish had just conceded a third goal when McLaughlin was told to get stripped.

At this stage McLaughlin’s professional career consisted of 14 first-team matches for Preston North End, a broken leg, a dislocated ankle and relegation from the Championship to League One. By his own admission McLaughlin was struggling at times, a situation that was to worsen when Preston employed Graham Westley as manager a couple of months after this game in Pescara.

That broad picture made the detail of this night all the more memorable.

“It was mad,” is how McLaughlin begins. “In the midst of this I was called up. Dave Healy, Steven Davis and a few other lads were still there. I’d been watching them on TV, I didn’t know them. And then I went on at centre mid.”

McLaughlin is a full back. He plays for Fleetwood Town at the bottom of League One. He is maybe the most underrated player – status-wise – in the Football League.

Back to Pescara, back to central midfield. McLaughlin’s previous Preston match had been at Wycombe Wanderers. Now Andrea Pirlo was his direct opponent.

“I’d only played central midfield in reserve games at school,” McLaughlin continues. “Here I was up against Pirlo. He gave me a bust lip actually – by accident.

“I was on for about 20 minutes, got three or four touches. Buffon was playing, unbelievable. Italian legends went to get awards before the game, all in their D&G suits – Maldini, Cannavaro. I was thinking: ‘What the hell am I doing here?’ It was class.”

We meet in Liverpool. Fleetwood is just up the Fylde coast in Lancashire, north of Blackpool. McLaughlin lives here with his fiancé, Rebecca, and their new-born baby Niall, who comes along to gurgle quietly through the interview. The city is where Conor’s younger brother Ryan is too – he is currently in Liverpool’s reserves having spent three months on loan at Aberdeen earlier in the season.

But quickly we are back on the Glen Road, west Belfast. This is where the McLaughlins grew up and where Conor, 24, started a career that will see him play in France this summer.

“My dad, Colm, played Saturday junior football, he had a trial at Bury when he was younger,” says McLaughlin.

“But my family’s more of a GAA background. My mum’s side is all St John’s, Belfast. My mum tried to get me into that, but from my early days it was all football. I played a bit of Gaelic at school. But I think I knew that soccer – as it was called in our school – was it.

“I started playing for Lisburn Youth at under-12. That’s got a bit of history with Northern Ireland players – Dave Healy. I was there until under-15, then I played for Linfield Swifts for a year before I came over here, to Preston.

“I’d a couple of trials at Man United, because I was in their school of excellence in Belfast. I was at Celtic once, Portsmouth, Plymouth, Preston.

“It’s hard, you’re a kid out of your comfort zone and to be judged on a one-day training session or trial game is quite harsh.

“I had to choose – Preston was the atmosphere that I felt back home. It felt like family, plus there were a couple of other lads from Lisburn Youth there at the time, Scott Davidson, who’s at Harland & Wolff Welders now, Michael McLellan, who’s just gone to Linfield. Preston had just started looking at Northern Ireland.”

Aged 19, McLaughlin made his Preston debut in November 2010 in a televised Championship match against Hull City. McLaughlin was a half-time substitute and he was marking Kevin Kilbane.

“I ended up injuring him,” McLaughlin says – and indeed Kilbane had to go off.

“We were in the relegation zone. Darren Ferguson was the manager. He was a good coach but he didn’t last long. There was turmoil with managers over a few years.

“I played eight games and there was talk of me getting in the Northern Ireland squad. Nigel Worthington came to see me play but then I broke my leg and dislocated my ankle against Bristol City. Bad timing. That set me back a couple of years. Which was tough.”

It took six months out of McLaughlin’s fledgling career. When he returned, Preston were in a lower division and the mini-tornado that is Westley was manager.

“Westley told eight or nine of us that we weren’t in his plans and we weren’t allowed to go to the training ground,” McLaughlin explains.

“He started putting stuff in the papers about the players being disruptive and rebellious, which wasn’t true at all.

McLaughlin went to Shrewsbury Town on loan and after release by Preston – never a good moment for a young player – on to Fleetwood. It was a free transfer to a club that had just been promoted from non-League and who had just sold on their star player, Jamie Vardy, to Leicester City.

A broken leg, relegation and released – all by the age of 20.

“That was my introduction to men’s football. It was a tough few years and I did think about packing it in. I was looking up university courses after Graham Westley came in.”

There would be two seasons in League Two, the second a promotion for Fleetwood via a Wembley playoff final victory over Burton Albion. That was May 26th two years ago; five days later McLaughlin was playing against Uruguay in Montevideo.

It was his second cap, nearly three years after the first. But the new Northern Ireland manager Michael O’Neill liked what he saw. What was even better for McLaughlin’s mother, Moya, was that Ryan played too.

“We played 10 minutes together against Uruguay,” Conor says. “He played right wing, I played right back. Forlan and Cavani were playing for them. Our mum texted Ryan after the match to make sure we got a picture together. We sent it to her straight away.

“Then we played Chile, I was right centre back of a three, and Ryan played right-sided striker. We were drawing 0-0 until Alexis Sánchez and Arturo Vidal came on. We played the full game against those players in front of 45,000. That’s what you want.”

Northern Ireland lost both those games late on and it meant their record was now one win in 22 games with qualification for Euro 2016 about to begin.

But a spirit was being forged and in their first qualifier, away in Hungary, the Irish won 2-1. They were off and McLaughlin impressed O’Neill so much he started in nine of the 10 matches that led to France. For the other he was suspended.

“The way people are back home, that’s what the team is like, they integrate you straight away,” McLaughlin says.

“I didn’t even know if I’d be in the squad. When I got in I was thinking to myself that there weren’t any other fit right backs but there was still doubt. Michael put me in, he had faith.

“After Hungary it was too soon to say we could be something, but I think that’s where the belief started. We hadn’t won away from home for so long, hadn’t won from going behind for so long and just the way we played. Different things. We kept the ball. Hungary were a good team and put us under a lot of pressure. Our second goal had so many passes.”

The leadership of Steven Davis, the goals of Kyle Lafferty, there are various elements to this Irish story, the team from pot five who ended up first in the group. McLaughlin is another.

There will not be many players in the entire tournament from clubs ranked lower than Fleetwood Town. He has just finished a fourth season at the club, where relegation back to the fourth tier has been avoided by two places.

Yet he is as comfortable as Davis or Jonny Evans at international level and O’Neill can scarcely believe no club in the Championship or Premier League has tried to sign McLaughlin.

So he remains where he is and is not downcast. If Northern Ireland are underdogs, McLaughlin is the underdog within, but he is a footnote no more.

His last competitive match may have been against Crewe Alexandra in front of 3,302; his next will be against Poland in Nice in front of 35,000 with Robert Lewandowski bearing down. He has been to Paris once with his girlfriend, soon he’ll be playing Germany at the Parc des Princes.

“Yeah, I sort of feel that,” McLaughlin says of the underdog tag.

“We’re punching above our weight. Then I go back to Fleetwood and we’re playing a different kind of football. Crewe, then Lewandowski? It’ll be a big difference won’t it? Mad.”