Conan Byrne back in contention as Saints look to seal qualification 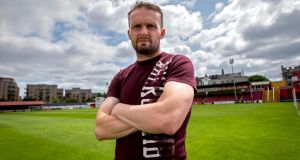 Conan Byrne is in line to play for St Patrick’s Athletic in their Europa League second-leg match against Skonto Riga. Photograph: Ryan Byrne/Inpho

Conan Byrne is back in contention to start for St Patrick’s Athletic in Inchicore this evening (7.45pm) as the Dubliners look to build on the away goal scored in Riga last week and qualify for the second round of the Europa League.

Liam Buckley’s side trail Skonto 2-1 from the first leg having allowed an early lead to slip away, but Byrne’s return will boost a side that not only needs to score but also to improve on the defensive side of their game against a team that clearly has the potential for more goals in it.

The threat posed by the visitors’ young attacking partnership of Arturs Karasausks and Vladislavs Gutkovskis was well known to Buckley and co before they travelled to Latvia, and the sense of disappointment that both were ultimately allowed to score “soft” goals was still clear yesterday as the manager weighed his side’s prospects up ahead of the second leg.

“We were disappointed with the result,” says Buckley. “I felt we at least deserved a draw, bearing in mind that Christy [Fagan] and [Chris] Forrester had reasonable chances. When I think back to what they [Skonto] had, their general play wasn’t too bad. They went 3-4-3 which is quite aggressive in relation to trying to win the tie. But we limited them to not too many chances.

“From our end, though, we remember Zalgiris here a couple of seasons back. I don’t think Clarkey touched the ball for 44 and a half minutes and then we got a corner this end, it was clipped in and they went on the counterattack and scored, which changed the whole dynamic of the game.

“So I’ve said to the guys, we don’t just go [out and try to score] in the first minute or the first 20 minutes; we’ve got 90 minutes to go and play and if we give ourselves a chance, I’ve no doubt we’ll score.”

Their run of goals in the league during the week leading up to these European games certainly suggests that they are capable of that. The potential problem, however, is the Dubliners’ tendency to concede at home in Europe with the club having gone four home legs at this stage since they last kept a clean sheet.

Jason McGuinness looks set to come in from the start this time, with Sean Hoare ruled out by the hamstring strain sustained in the build-up to one of the Skonto goals last Thursday, but Ger O’Brien came through training yesterday without any problems having come off in Riga at half-time as a precaution.

The skipper’s ability to get through all 90 minutes this evening will be an important factor and if there is any lingering concern over his full fitness then Byrne may not be risked from the outset given that he has been laid up for a few weeks himself with a similar problem.

Before that, though, he had been hitting an impressive run of form and the 29-year-old is keen to get back involved. “I’ve worked very hard to get back, the physio has been great for me, I’ve listened to him, worked hard in the gym, worked hard on the training pitch so I’m ready to go now.”

Buckley, meanwhile, says that he has no further plans to meet with Damien Duff but would be delighted to have the former international at the club.

Duff is expected to sign for Shamrock Rovers over the coming week or so but both clubs are at pains to make clear that no deal has yet been done.

And the St Patrick’s Athletic manager has confirmed that Ciaran Kilduff may be allowed to join either Dundalk or Limerick, both of whom have enquired about his availability. But, he says, any move is contingent on a replacement being identified and “a few things falling into place”.