Brian Kerr: Wes Hoolahan’s creativity fills me with hope for the summer 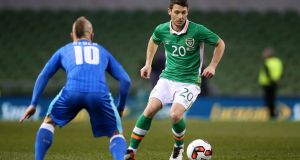 There’s more than one way to put them under pressure. With Wes Hoolahan as our creative director, as we saw for 71 minutes last night against Slovakia, the Republic of Ireland can go to this summer’s European Championships in France and play football. We can focus on what we do, not what Sweden, Belgium or the Italians throw at us.

Hoolahan can be the difference between Ireland finishing as also-rans or qualifying from Group E at the Euros. It’s his positional sense, his footwork, his passing, how he links up and how others love to play off him.

He has the rare gift of making others look better than they are.

Thirty-four in May. Imagine what could have been? We never used you properly, Wes.

At least it looks like Martin O’Neill’s Ireland will, finally.

The only concern last night was the defensive frailty, where there was an obvious lack of pace, but that’s offset by the composure shown by the back four last Friday against Switzerland. Paul McShane appeared to play himself out of contention for the 23-man squad for the Euros after an error for the first Slovakia goal and scoring their second.

The centre half pairing of Shane Duffy and Ciarán Clark against the Swiss was needed to reward the amount of possession Ireland had.

Slovakia are a technically solid and physical bunch, but they gave us an extraordinary amount of space to pass through them with our diamond formation.

At least all the chopping and changing over these two games keeps Ireland’s three June opponents guessing. The problem with the diamond system is it takes time to adapt but it was obvious that it accommodated Wes and two strikers. He seemed to touch the ball more in the opening seven minutes than the entire Irish midfield managed in 60 minutes against Switzerland. Very encouraging.

It helps that he had Glenn Whelan and James McCarthy sitting in behind while Eunan O’Kane also looked the part just off to the right.

Unfortunately for O’Kane, despite having a real future in the green jersey, I think Harry Arter’s form for Bournemouth will see him make the squad. But O’Kane has given himself a chance.

But this night belonged to Wes. It’s great to see Irish players putting their faith in their most creative player. Give Hoolahan the ball and he picks the correct pass every time. Proper football. He controlled the game for 25 minutes and for pockets in the second half.

The two occasions we didn’t play through Hoolahan in midfield came when John O’Shea chose to hit long balls into Shane Long. One was inaccurate, the other over-hit. Both gifted the Slovaks possession. When it went through Hoolahan, McCarthy and Whelan everything seemed right with the world.

In the second half Long’s injury forced a very interesting trio of Robbie Brady, McCarthy and Hoolahan – all natural footballers – who combined for some beautiful play.

Still, the departure of Long diminished our pressure game on the Slovak defence.

They tried man-marking Wes but he cleverly drifted wide to leave a hole for Ireland to drive through in the middle. What more evidence do we need?

Sweden are not unlike us (Zlatan notwithstanding) having qualified third in their group and making the Euros via the play-offs. They do, however, play passing football despite possessing inferior players to ours (again, Zlatan notwithstanding). System-wise they use a flexible 4-4-2 with Ibrahimovic floating about with licence to create havoc. We all know this from the 2-1 defeat in 2013 in Dublin when Trap tried to batter them with long balls from David Forde. The Swedes gobbled these balls whole. Surely we need to get three points out of them in the Stade de France on June 13th.

Ireland will get time on the ball against Belgium and Italy as neither press high up the pitch, so the opportunity will be there to build from deep with Whelan and McCarthy.

But all praise to the little man who has finally become the most important player in Irish football. If a brave demise is all we want at the Euros, then we can revert to type. But if we trust in our midfielders, then here’s the template. Like I said, there’s more than one way to put them under pressure.

1 Seán O’Brien: Anger over my parents’ break-up never left me
2 Madness or defiance? The GAA is taking a huge gamble in staging Championships
3 Gibson-Park, Earls and Kelleher all in race to make Ireland’s French finale
4 Dan Martin keeping it day-to-day as Vuelta proves challenging for riders
5 All in the Game: Klopp’s Amsterdam subs don’t go down well
Real news has value SUBSCRIBE
Crossword Get access to over 6,000 interactive crosswords