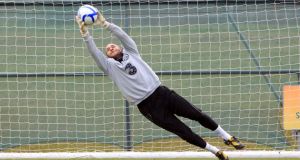 Darren Randolph: goes head-to-head with Colin Doyle for the number one spot at Birmingham City.

Birmingham City boss Lee Clark may have struck upon an unlikely accommodation between Irish goalkeepers Darren Randolph and Colin Doyle in Tallaght on Monday when, due to a second-half injury, he brought Doyle on up front.

However, both players know it will be a straightforward head-to-head for the one available spot in the club’s Championship starting line-up this season.

The pair go back a bit, having played, and roomed, together in the Irish under-21 squad almost eight years ago, but Randolph’s arrival from Scotland over the summer makes him Doyle’s latest rival at a club where, a decade after he arrived, he is still anxiously trying to establish himself as the manager’s first choice. It all makes for a slightly uneasy friendship between the pair.

The Corkman has, in fact, played barely 50 first-team games for City since arriving from Douglas-Hall, with around half coming during a spell in early 2007 when he helped the club clinch promotion to the top flight and, in the process, appeared to have made the breakthrough he had been striving for. Instead, a shaky start to life in the Premier League quickly cost him his place after which a succession of high quality rivals kept him out.

“It’s been difficult,” admitted the 28-year-old. “We’ve had quality keepers . . . we had Joe (Harte), we had Fozzy (Ben Foster), we had Boaz (Myhill), we had Jack (Butland) and they’re all international goalies so it was frustrating, but hopefully this year I’m going to play a bit more.”

Made it clear
Not if Randolph has anything to do about it, of course, but Doyle takes heart from the fact that Clark could have allowed him to leave at the end of last season when his contract was up but made it clear instead he would prefer the Irishman to stay, offering him a new two-year deal and the promise that he would get to compete as an equal with the new arrival.

“The thing about Lee Clark is that he’s an honest man. When you speak to him he tells you how it is and if he had said to me ‘listen, you’re not going to be playing’ then I probably would have moved on but he told me ‘I’ll give you a fair crack of the whip; you’ve got every chance of playing’, so that decided me to sign up,” said Doyle.

For Doyle, international recognition is probably a secondary consideration for the moment although clearly he would like to add to his single senior cap – against Ecuador in New Jersey six years ago - but Randolph has become a regular in recent Irish squads after three good years at Motherwell. He earned his second cap when he came on against Spain in New York only last month and has gambled that moving to City will help rather than hinder his progress; something that effectively depends on him keeping his fellow Irishman out of the team.

‘Better quality’
“No disrespect to the SPL but obviously with what’s happened up there the championship is stronger,” said the 26-year-old from Bray. “You have a better quality of player so you’re going to be tested and looked at more seriously.”

This, he says, could be crucial to his international hopes if, as expected, David Forde, Keiren Westwood and even Shay Given, are all playing regularly this season.

“I think there’s always been a couple of keepers not playing,” he said. “But if we’re all playing, you know, we’ll see what happens.

“I was hoping to get longer (on the pitch in Ireland’s end-of-season games) but at least I got some time.

“Now I know I’ll have to bide my time and wait my turn. I’m not saying that I expect to go in and play every friendly – I’ve done it before and it’s no different now . . . But me and Colin, it’s exactly the same.”

Randolph started Monday’s friendly against Shamrock Rovers and looked comfortable – without ever having much to do – but he admitted that Clark has given him no guarantees regarding the season proper.

“He just said to come in and train and go from there. That’s all I can do, train hard every day, try to put in strong performances in the games and hopefully . . . I’m happy to take up the challenge; I want to be a part of something and obviously I feel that with Birmingham I have a real chance of doing something.”

It’s a good move, then? “We’ll see if I start the season or not,” he said with a slight shrug.

1 John Egan the hero for Sheffield United against Wolves
2 Mohamed Salah double sees Liverpool clip Brighton’s wings
3 Roger Federer: The balletic genius whose greatness goes deeper than numbers
4 Pete Sampras: The forgotten great with the best serve in the business
5 Tipping Point: DeChambeau’s transformation raises questions, but who will ask them?
Real news has value SUBSCRIBE
Crossword Get access to over 6,000 interactive crosswords