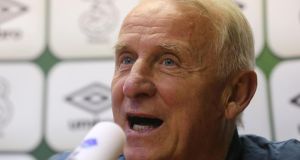 Giovanni Trapattoni: “We needn’t give up on our dream of qualifying for Brazil.” Photograph: Lorraine O’Sullivan/Inpho

Football management being what it is, a late goal for England in Wembley on Wednesday night and Giovanni Trapattoni would have been sitting in Malahide playing down the significance of a friendly defeat.

Instead, the Italian got to hold the game up proudly yesterday as evidence that his side can still battle their way to Brazil.

Somebody should tell him, perhaps, that it’s not been any inability on the part of his boys to get draws on the road that has left their hopes of qualification hanging in the balance.

The Italian, of course, has to come across as optimistic and the reference to qualification as “a dream” certainly suggests that he views the second half of the campaign with more hope than expectation.

Still, he pointed to the opening game in this end-of-season series as firm evidence that a new generation of players is beginning to show the confidence to seize centre stage.

“We have tough games to come; against Sweden, Austria and Germany but I told them, as I told you last night, that with this group, with the changes that have given us a new squad, we needn’t give up on our dream of qualifying for Brazil.”

Coleman’s performance
After another strong performance Séamus Coleman was clearly one of the players he had in mind.

The former Juventus coach suggested the young defender has the potential to be the equal of an Antonio Cabrini or Claudio Gentile, both outstanding stars for the club during his time there. The 24-year-old, he made clear however, still has some way to go.

“It was a good performance,” he remarked, “but I said to him to remember that when the opponent gets the ball you have to defend. He’s clever and intelligent but he has to think about when to attack and where he can afford to lose the ball.

“Near the other team’s box there are situations where he can do what he wants but near ours he needs to be more careful. He understood what I was saying and with experience he will make the right decisions.

“It’s like I said about [Darron] Gibson, the more games Coleman and McCarthy play for their clubs the more experience they will have.”

Pressed on the actual extent of the Coleman’s potential, he said he brings something at right-back that has been missing since Steve Finnan departed but ultimately he could go some way beyond that.

“At Juventus I had Gentile; or Cabrini, who played on the left [side of the defence]. He scored goals and Coleman has the personality and the potential to be like him.

“He has to believe that he can do it but also to know when to do it . . . when to dribble, when to pass and when to make sure that he doesn’t lose the ball.”

Georgia game
The Everton player may well retain in his place for Sunday’s game against Georgia but Trapattoni hinted that he will make substantial changes so as “to let the others know that they can play”.

On course to be rested, it seems, is David Forde whose performance at Wembley appears to have copper-fastened his grip on the goalkeeper’s jersey. The Galway man had his knee strapped up in Malahide yesterday and Trapattoni said Keiren Westwood will start against Georgia, with Darren Randolph likely to get some game time.

The extent to which he changes things after that was slightly unclear, with the manager suggesting on the one hand that it would be a very experimental side, but then appearing to indicate that some regulars like Marc Wilson will feature, although in his case the purpose will simply be to establish his fitness.

Wes Hoolahan, Jeff Hendrick and Robbie Brady all look to be contenders to start as some of the regulars are rested up for the qualifying game. Robbie Keane seems almost certain to play some part, meanwhile, so that he equal Shay Given’s record of 125 appearances.