Future cloaked in uncertainty as Premier League bows to the inevitable 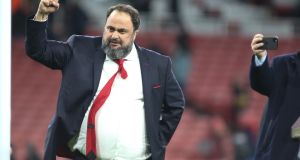 Evangelos Marinakis: the Nottingham Forest and Olympiakos owner announced on Tuesday that he had contracted the coronavirus. Photograph: Federico Guerra Moran/NurPhoto via Getty Images

Amid the coronavirus pandemic and the mounting sense of anxiety, even those that bring a can-do attitude to their positions of influence in British football have seen the worst-case scenario become reality during what has been a fast-moving and game-changing week.

Everybody has asked the question. What if a player in the Premier League or English Football League (EFL) was to be infected? How would that affect the continuity of the competition? Now we know. Or, at least, now we know that there is to be a complete shutdown “until April 3rd at the earliest” to quote from the English Football Association’s statement yesterday morning.

The news was no surprise. It was the only sensible course of action after a whirlwind period when the conversation had gone from ensuring supporter safety at matches to take in the issue of player welfare.

In terms of football on these shores, patient zero appears to have been Evangelos Marinakis, the Nottingham Forest and Olympiakos owner, who announced on Tuesday that he had contracted the virus. Marinakis attended Forest’s home game with Millwall the previous Friday and visited his players in the dressing room afterwards. He had also been at Olympiakos’s Europa League tie at Arsenal on February 27th.

Arsenal’s players and staff did not have the time to be screened and tested before their match at Manchester City on Wednesday so that was postponed as a precaution but everyone knew, in their hearts, what was coming.

If the issue was purely about the health of fans, it would have been possible to see a set of circumstances when the authorities could have got matches on behind closed doors, found a way to protect the broadcast income – possibly via online streaming subscriptions, including for Saturday 3pm kick-offs – and, also, to support clubs, particularly in the EFL, in terms of the gate revenues they would lose. The wealthy Premier League elite might have been persuaded to help out.

But the situation changed sharply as clubs began to announce positive tests and 14-day self-isolation programmes for their players and members of staff. Arsenal said on Thursday night that the manager, Mikel Arteta, had got the virus and Chelsea said the same about the winger, Callum Hudson-Odoi. Both clubs went into lockdown and, at that point, the rapid multiplication of symptoms and self-isolations elsewhere, which we saw on Friday, was grimly inevitable.

The show has stopped and yet it must go on, at some point. In short, the leagues must finish. The FA said that “all parties are committed at this time to trying to complete this season’s domestic fixture programme” while the Premier League said it was their “aim to reschedule the displaced fixtures . . . when it is safe to do so.”

A note of perspective, were it needed. The British prime minister, Boris Johnson, has said that many families should expect to lose loved ones. It is possible that more than 500,000 people in the UK will die. That is the definition of a worst-case scenario.

Against that, who cares whether the leagues of our daft and maddening national sport can reach their conclusion? The thing is that people do care. Deeply.

Liverpool supporters have waited since 1990 to toast a title win. How would it sit with them if the Premier League was to be annulled and their looming triumph condemned to have an asterisk alongside it? The feeling is the same for Leeds supporters, who are close to a top-flight return after 16 years away. Or for any fans of any other club chasing glory.

If the leagues were not able to be completed, if the integrity of the competition were compromised, it would also create a legal minefield, particularly for clubs involved in promotion and relegation. Take Leeds United, for example, where the owner, Andrea Radrizzani, has invested £100m in the hope of getting them into the Premier League, where the broadcast revenues would see that pay off handsomely.

Leeds are seven points clear in the race for automatic promotion with nine games to play and, as such, are firm favourites to go up. How would Radrizzani react if the season was to be cancelled and the status quo endured?

The Premier League’s current bottom three – Norwich, Aston Villa and Bournemouth – would stand to collect another season of the £140m TV jackpot while Leeds would get another round of £3m. A lot of lawyers would be rubbing their hands.

There would be claims on every level. If the Premier League was not finished Leicester could be denied a return to the Champions League. Europa League spots, including one for Sheffield United, might have to be reappraised. And this is before we talk about players’ contractual clauses such as promotion bonuses or other performance-related targets.

On Tuesday, a Premier League chairman said that “if a few players at any club get the virus, the season would have to be abandoned”. Others say this is not the case, that there do remain solutions in terms of fixture rearrangement.

Central to this would most likely be the postponement of Euro 2020, which would allow the period from the end of the domestic season in May up to mid-July to be used as a fall-back. If the Euros are not moved, it would be much more difficult, perhaps too difficult, to see a way of completing the domestic fixtures.

In simple terms, the tournament is more easy to reschedule, as it has not started and, financially, the top of the game’s pyramid is a much safer place to take a hit. Would Uefa be happy about it? No. They would have concerns about the potentially huge economic impact for them, in terms of sponsors and so on.

But in an imperfect world, the least bad decisions must be taken and Uefa will be acutely aware that qualification to their prestige club tournaments – the Champions League and Europa League – rely upon the successful conclusion of domestic leagues across the continent.

The governing body will discuss the future of the Euros on Tuesday.

The option of playing matches behind closed doors in Britain has been discussed and many club executives had expected it to come into force by the middle of next week before the sudden deepening of the crisis, even if Jürgen Klopp, Pep Guardiola and others have said that football without fans is nothing.

To clubs in the EFL, losing out on money through the turnstiles would be “economically crippling,” in the words of one Championship chief executive. Outside the Premier League, clubs cannot rely upon broadcast riches and there is a view that the suspending of matches – rather than allowing them to stumble on behind closed doors – with a view to rescheduling them in front of crowds, is preferable on a financial level.

That said, no matches in the short-term equals a cash flow hit to EFL clubs because players still have to be paid and sponsors satisfied. If the season was to be cancelled, the consequences would be serious.

The situation is evolving at pace. It was only on Thursday afternoon that Johnson said there was “no medical reason” to ban sporting events. That was based on expert advice, on data, but there often comes a point when public opinion and perception intersects with science. The football authorities felt they had to act decisively, unilaterally; perhaps on the back of Europe’s other major leagues shutting down.

Clubs throughout Britain have taken precautions when it has comes to protecting their most fundamental assets – the players. For example, training ground visitors have been banned, as have match-day stadium tours that might have gone into the dressing-room. Players’ public appearances have been stopped. Sanitation measures have been upgraded.

It feels as though players are showing symptoms of the virus at greater rates than the general working public but the reality is that they are more closely scrutinised, with daily temperature and heart rate checks. Are they being identified better and, by extension, do they stand as a symbol of how widespread the virus truly is?

Players are certainly symbols of British life and the government has wanted to keep the game going to maintain national morale. It has not been possible. The future is cloaked in uncertainty.