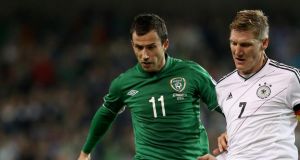 Keith Fahey, who hopes to step up his training programme as he looks for a new club

Republic of Ireland midfielder Keith Fahey hopes to get the green light today to step up his campaign to be fit again by September as he looks to recover from hip surgery and get himself a new club.

The 30 year-old Dubliner was released by Birmingham City at the end of what had been a difficult year with personal issues and an ongoing injury ensuring that he made only sporadic appearances for the Championship side.

In the end he opted to have surgery on a hip problem that he felt had prevented him being fully fit for several seasons but the timing of the operation means he will miss the start of the new campaign with the result that his opportunities may be limited.

“There’s been a couple of clubs (interested) but nothing concrete. I just have to wait until I’m at a stage where clubs can take me in and have a look at me because I wouldn’t pass a medical at the moment. Hopefully, there will be options there.”

Fahey was disappointed not to be even approached a new deal with Birmingham despite accepting that it would have involved a large pay cut given the club’s current financial situation. He is, he says however, open to considering pretty much anything for next season with a move further afield certainly a possibility.

“I just want to get back and play football somewhere. Anywhere,” he says. “I’m willing and open to anything. I know, I’m realistic, I have to take a massive wage cut and I’m willing to do that. It’s not as if they (Birmingham) offered me a deal and I said ‘no, I want what I’ve been on’. I wasn’t offered a deal full stop.

“But it’s not just about England. There are other countries that I’d be happy to go and try out. I’m 30, 31 in January. I want to play abroad some day so I’ll see how it goes. It would suit my style, hopefully. I’ve just got to see what I can get. We’ll see what happens. I don’t honestly know, I’m not being short, I’m just doing rehab. But I’m relaxed enough; I’m not worried about getting a club.”

As for his place in the Ireland set up, he says: “If I’m playing well at a decent level, then I’ll look at that. There are players who are after taking their chance in midfield who have come through so fair play to them, it’s going to be hard for me to get back in there as well.

Positive news from his surgeon today would get him closer to that goal with Fahey anxious to progress his rehabilitation programme. “I’m doing gym work, pool work, bike work. I’m doing gym work to strengthen up my muscles around my hip. Everything is going well, fingers crossed. There have been no set-backs so hopefully I’ll get good news.”