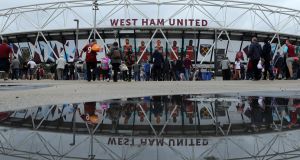 Supporters walk to the London Stadium ahead of West Ham United’s home match against Watford, which they lost 4-2. As Billy Bonds said this week, whatever the London Stadium is, “it isn’t a football ground”. Photograph: Richard Heathcote/Getty Images

Ten o’clock, Wednesday night, and those who got away quickly are already in the Bow Bells pub on Bow Road, east London. The TV screen is relaying the draw for the next round of the English League Cup and West Ham United are paired with Chelsea. At home.

From those sporting claret and blue, there are knowing looks. Chelsea? At home, this home? It is a draw that matters on more than one level.

If players sometimes speak of good tension and bad tension, then this was another form – unease. Almost 6,000 Chelsea fans in and around a stadium where there has been trouble with Watford fans, where there has been inadequate stewarding, it is a prospect requiring addressing.

But then the unease had been there three hours earlier, before kick-off against Accrington Stanley. In fact, West Ham have been uncertain since the start of the season.

This was only the fifth competitive game at the ‘London Stadium’, as the former Olympic Park is known, none of which have been London derbies. The old fixture computer did West Ham a favour there.

For many loyalists, their answer focuses first on where West Ham are not. And that, of course, is Upton Park.

To some, and they are vocal, this is a hurdle they are struggling to get over. For them the move away from Upton Park is about more than geography. It is also about an intangible such as ‘soul’, about history, tradition. Those elements are personal as well as club-related. This is the emotional grip football can exert.

But part of it is physical. Whereas Upton Park was hemmed in by tight streets, the London Stadium is set in a vast expanse.

Whereas the stroll from the old tube station down Green Street was bustle, noise, colour, the walk up an old thoroughfare such as Bow Road is long, wide and roaring with traffic. There is none of what the author Simon Inglis describes as “intimacy”.

Upton Park was intimate, among other things. The area created an atmosphere of its own. Some did not like it – they often found the place intimidating rather than intimate.

Now the contrast between old and new is apparent and simply walking Bow Road brings an understanding of the sense of dislocation many West Ham supporters speak of.

The former Olympic Stadium can be approached from Upton Park – though it’s around an hour on foot – and the journey leads through the new Westfield shopping development at Stratford. Its gleaming shops and restaurants are the opposite of the outdoor market, sticky pubs and kebab shops that populate Green Street.

In Stratford there are cranes everywhere, the anecdotal metric of a booming economy; but, it is asked, what are they constructing?

As Bow Road crosses the River Lea there is also building site upon building site. New apartment blocks promise ‘exclusive living’ re-emerging in an overgrown landscape that takes you back to some grey backstreet episode of The Sweeney.

As a promise, exclusive living probably sells. It’s just it is the opposite of the inclusive living which old east London thought it had and which it cherished. Unquestionably, there were dollops of sentiment in that perception, but there was also truth. East London, to those born and bred there, had a feeling and sense of identity that locals understood as ‘theirs’.

As the new stadium looms spectacularly amid a formerly neglected area, you can see why those who feel this way view the London Stadium as symbolic of broader change. It’s the difference between their London and and New London. Their London was Upton Park; New London is this. And, as Billy Bonds said this week, whatever the London Stadium is, “it isn’t a football ground”.

Bonds was right. The place is a ‘venue’, not a football ground. So far.

In northern England football towns such as Stoke and Sunderland, there were large Brexit votes because of a (legitimate) working-class sense of alienation, of being left behind, particularly by boom-time London.

It has been made clear that a section of white working-class east London shares that opinion, sees itself disappearing.

What is striking is that this is whirling around the club, and that such thoughts should even occur on a walk to and from a match.

But as Slaven Bilic bent over and grabbed his knees in frustration as West Ham laboured to overcome fourth division opposition, adding to a disappointing start to the season and to uncomfortable life in a new home, Bilic and the club looked to have a lot more than a misfiring team on their agenda.

There was again ticketing chaos outside, there were again complaints about stewarding. Meanwhile, footage emerged of Upton Park being half-demolished having become a temporary film set.

So there is much shouting. A friend who was behind one of the goals on Wednesday spoke of aggressive behaviour by a sector of West Ham supporters who were questioning the attitude of those they view as newcomers. It is self-annointed ‘authentic’ fan setting himself against the inauthentic arriviste. The authentic stand, the inauthentic sit.

Those ranting possibly don’t like east London changing. Part of that is cultural and ethnic, and part of it is about the excluding reality of gentrification. They definitely don’t like West Ham United changing, especially when they don’t win.

In the old days they had players called Billy, Bobby, Geoff and Trev in the team and they played in front of the Chicken Run. You knew who was who and what was where.

On Wednesday it was Alvaro, Sofiane, Simone and Gokhan and, with Darren Randolph in goal, not one of the starting XI was English.

Put all this together and there’s a bottleneck of angst. And Chelsea are coming next month.

Then step back. A man called Dimitri came off the bench to score a winner six minutes into injury-time. He’s a bit of a local hero, regardless of where he’s from. There’s talent in the squad and in the dugout.

Step back again. There were nearly 40,000 people here to watch West Ham face Accrington Stanley on a Wednesday night. It was the largest attendance of the round, 13,000 more than were at White Hart Lane to see Tottenham play Gillingham and some 5,000 more than Upton Park’s capacity.

One step further: over 52,000 season tickets have been sold for this stadium folk don’t want to go to.

So, where exactly are West Ham United?

Andy Farrell set to name first Ireland team; FAI staff upbeat after first meeting with Quinn and Owens 07:27
‘It doesn’t bother me’ – Thomas Barr on the what ifs of Rio 07:00
Hopes of a home winner alive as Barty reaches last four 07:38
Waterford’s Bennett aware of past but looking to a better future 06:30
Owen Doyle: Breakdown of law and order in rugby must stop 06:30