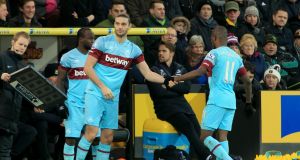 Andy Carroll returned from injury against Norwich but is now facing another lay-off. Photograph: Getty

Injury-jinxed West Ham striker Andy Carroll is back on the treatment table and will miss Sunday’s FA Cup clash at Blackburn.

The 27-year-old forward had just returned from a month out with a hamstring problem when he suffered an abductor injury after coming on as a substitute during last weekend’s 2-2 draw at Norwich.

Carroll has been beset by injury problems since joining the Hammers and has started just 31 Premier League games in two-and-a-half years.

But co-chairman David Gold hopes the latest setback will not mean another lengthy lay-off for their £15million club-record signing.

Gold wrote on Twitter: “Andy has a slight injury and will be rested for the game against Blackburn.”

Boss Slaven Bilic faces a striker shortage for the trip to Ewood Park after Enner Valencia was also injured against Norwich.

The Ecuador international limped off after sustaining an ankle knock midway through the second half at Carrow Road.

With Diafra Sakho still sidelined due to a thigh injury and Nikica Jelavic completing his move to Chinese second division side Beijing Renhe earlier this week, Bilic may have to throw January signing Emmanuel Emenike in for his full debut up front.

Bilic does have some positive fitness news, however, after Manuel Lanzini returned to training this week.

The Argentinian midfielder, who has scored four goals in 14 appearances this season, is available for the fifth-round clash with Rovers after six weeks out with a thigh injury.