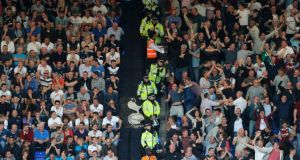 Tottenham 0 West Ham 3: Who needs strikers? Not Sam Allardyce for this London derby. The West Ham United manager’s response to his team’s failure to score on their travels this season was to ape Spain’s European Championship-winning 4-6-0 formation. The result was a performance and result beyond the dreams of the club’s supporters.

They will remember the second half for many years and, if any gloss were required, it was provided by Ravel Morrison, the mercurially gifted midfielder, who scored a goal that had the wow factor stamped all over it. Picking up possession just inside his half, he accelerated away from Jan Vertonghen before beating Michael Dawson, smoothly keeping his balance and clipping a right-foot finish past Hugo Lloris. The visiting enclosure embraced mayhem and an element of disbelief.

Ricardo Vaz Te’s goal was a fluke. From Mark Noble’s through-ball, Vaz Te shot against the advancing Lloris and saw the ball fly back at him, hit a knee and ricochet into the far corner.

West Ham’s first also contained a streaky element. The excellent Winston Reid directed a header goalwards only to see it hit Kevin Nolan, his team-mate, who was standing in front of the goal-line, with Lloris looking beaten. Yet the ball rebounded to Reid, who he kept his composure to shoot home. Blue flares lit the scene.

West Ham had felt their previous away results had been underpinned by bad luck. They had played well, particularly in defensive terms, and their fortunes would surely turn. How they were vindicated, leaving Tottenham to lament an afternoon when nothing went their way.

Apart from a burst at the beginning of the second half, they laboured. Villas-Boas grumbled about West Ham being defensive and scoring from a set piece yet both are permitted in the game.

There was a smattering of boos from the home supporters who had stayed to the final whistle.

West Ham’s formation was a talking point, with Allardyce using four central midfielders; Morrison and Mohamed Diame in front of Nolan and Noble. It looked as though Morrison and Diame had begun as false No9s. Allardyce’s idea was that Downing and Vaz Te, who started wide, would drift into more central areas as strikers but where the strategy worked was in the restricting and frustrating of Tottenham. West Ham’s loss of Andy Carroll, their true number nine to injury has cast long shadows but not here.

Reid defended manfully but he fluffed one of the few first-half chances when he glanced wide from Noble’s corner. Noble also worked a free-kick routine for Nolan and he watched the captain hook his volley past the far post.

Andros Townsend was direct and lively for Tottenham but they had little to show for their first-half efforts; Paulinho twice sliced wide and that was about it.

They were better at the start of the second half, with Jermain Defoe, preferred to Soldado against his former club, going close to the opening goal. Released by Paulinho, he found himself one-on-one, briefly, with Jussi Jaaskelainen but the goalkeeper was out quickly to block his prodded shot.

Moments later Defoe unfurled a vicious drive from the edge of the area that Jaaskelainen tipped over the bar.

West Ham changed the game when they capitalised on their set-piece strength. Tottenham had been warned in the 55th minute when James Tomkins headed down from a corner and, with Nolan in front of him, Lloris clawed to safety.

Nolan would be a central figure in the opening goal and thereafter West Ham took Tottenham apart.