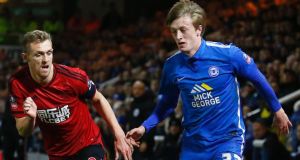 West Bromwich Albion’s desire to ensure the final third of their season amounts to something more than a grim battle against relegation was tested to the very limit by Peterborough United.

The League One side took a thoroughly deserved second-half lead, and after a well-struck equaliser from Darren Fletcher took the tie into extra-time, both sides created chances to win a hugely entertaining match before the Baggies went through 4-3 on penalties.

In one respect, of course, Peterborough could not lose whatever the result, this replay realising the club around £350,000 in television fees, gate receipts and advertising. Welcome though that sum no doubt was, however, Peterborough have become proficient at maximising revenue over the last few years, during which players have been sold for more than £25 million, meaning progress to a fifth-round tie at the Championship side Reading did not represent the financial lifeline it might once have done.

Suspensions and ineligibility, as well as inclination, caused the manager Graham Westley to make five changes to his last line-up, which held on to win with nine men to beat Chesterfield, and four from the side which drew at The Hawthorns.

His opposite number, Tony Pulis, made three to the side beaten at Newcastle, arguably the most interesting being the promotion to the starting XI of Saido Berahino. Judging by the size of him on his return to the first-team fold, the refusenik forward is in need of as much football as he can get.

In point of fact, of course, Albion’s lack of goals of late made Berahino’s recall something of a necessity, but he was a spectator for much of the opening quarter hour. Posh poured forward with pace and in some style, creating a handful of decent shooting opportunities. Harry Beautyman saw one side-footed effort blocked and Jon Taylor shot wide before Ben Foster had to block Beautyman’s fierce drive from a narrow angle.

By then Albion had lost Gareth McAuley, the centre back pulling up with a hamstring injury after a rare foray upfield, to be replaced by Sébastien Pocognoli. The tackling was robust, on both sides, and come the half hour, the Baggies had not improved on their record of having failed to have a single shot on target in three of their previous four games. Berahino, with a lovely side-footed volley from Salomón Rondón’s knock-down outside the box, nearly did so: the Posh goalkeeper Ben Alnwick looked relieved to see the ball just past his left-hand post.

As half-time approached Albion, finally, began to carry a more consistent threat. James McClean’s shot was blocked, and from the corner James Chester’s shanked close-range shot hit Fletcher and flew over the bar.

The break gave Peterborough fresh energy. It took a well-timed tackle from Pocognoli to prevent Lee Angol from getting a shot away after the young forward created a yard of space in the Albion penalty area, Taylor deposited a free-kick into the midriff of Foster and Shaquile Coulthirst curled a shot beyond the goalkeeper but a foot beyond the post.

Albion were living dangerously, and 10 minutes into the half they went behind. Caught short at the back by a swift break, they couldn’t prevent Angol pulling the ball across the field to Taylor, sprinting into space down the left. The midfielder’s left-footed shot did not look cleanly hit, but it was enough to brush aside Foster’s reaching hand.

Albion’s response was unimpressive in the extreme; almost immediately they were exposed on the break again, and Coulthirst would have done better to try and find the players in space on either side of him than attempt to beat Foster with a curler that again went straight into the goalkeeper’s hands.

Pulis, trying to regain some sort of initiative, replaced Claudio Yacob with Stéphane Sessègnon. Initially it made little difference: if anything, the margin of superiority increased in the League One side’s favour. There were moments, though, Craig Gardner’s volley from 25 yards a case in point, and on 71 minutes they equalised. Beautyman failed to clear McClean’s cross, and Fletcher thumped a rising shot cleanly past Alnwick.

Still Peterborough came forward, and still they created chances. Coulthirst, picked out by the marvellously impressive Martin Samuelson, took too long to control the ball but was still given enough time to hit a powerful low drive a foot wide.

Albion might have won it in normal time when Alnwick’s scuffed clearance was returned towards the empty goal by Berahino, only for Michael Bostwick to kick the ball clear.

Extra-time was no less absorbing, with Gabriel Zakuani’s remarkable headed clearance of Gardner’s goal-bound shot the nearest the deadlock came to being broken until Berahino, totally unmarked in the very final minute, contrived to head wide from inside the six-yard box.