Watford dump holders Arsenal out of the FA Cup 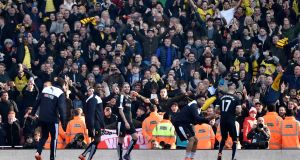 Watford earned themselves a trip to Wembley in the FA Cup semi-finals with a display of marauding forward play that left Arsenal shellshocked and out of a competition they were aiming to win for the third season in succession.

Arsène Wenger had been right to flag up the danger of Watford’s pairing of Odion Ighalo and Troy Deeney. Their application and accuracy led the way for the team constructed by Quique Sánchez Flores. The damage they caused was spectacular, and there was a moment for the Hertfordshire team to cherish as Adlène Guedioura scored what turned out to be a blistering matchwinner. Arsenal’s centre-halves, who strained for composure and communication, face Messi, Suárez and Neymar on Wednesday night and their confidence is already shredded.

Watford’s joy was unfettered at the end of it all and rightly so. What a coup to accompany a promising Premier League season. Their players danced in front of their supporters come the final whistle. Even some of the home fans felt able to applaud them off, appreciative of their efforts on the day.

Any suggestions that the FA Cup might have been lagging on Arsenal’s list of priorities this week were dismissed by the strength of Wenger’s team selection. Alexis Sánchez and Mesut Özil were back in a lineup that was in no way chosen with a fraction of an eye on Barcelona and the Champions League. But the brutal truth is that they were not clinical at either end against Watford and paid a heavy price.

A frenetic and at times sloppy first half fell into a pattern of Arsenal snatching at chances and Watford, whose threat was evident whenever Ighalo was found on the break and able to burst at speed in the general direction of Arsenal’s centre-backs. He seemed to lack a little incision in the early exchanges but that wouldn’t last long.

Watford worked hard at funnelling a lot of bodies back quickly to try to deny Arsenal’s attack time and space, and hustle out opportunities. An early goal might have changed the complexion and Arsenal went close as Sánchez turned sharply to thread a ball for Giroud to finish cleanly. It was disallowed by a tight offside call. The visitors didn’t seem unduly worried at letting Calum Chambers repeatedly get forwards on the overlap. A couple of chances fell to Mohamed Elneny, Arsenal’s new Egyptian, who looked too desperate to impress as he shanked one and arced another over.

Wenger has too often had to bemoan his team’s lack of ruthlessness and there was a familiar feel as opportunities begged. All the while there was that threat of Watford’s lurking frontmen. Ighalo caused problems whenever the ball arrived. On a couple of occasions he seemed too eager to find his partner, Deeney.

It was symbolic of Deeney’s attitude that he reacted in such a no-nonsense way to a ferocious challenge from Gabriel Paulista. They both raced full pelt to meet a loose ball. Was it thunderously dangerous by the Brazilian defender, or a good old-fashioned challenge? Either way it looked painful but Deeney was able to dust himself down and carry on.

Watford could be thankful he did as he was so influential in the second half. The Hornets took the lead early in the 50th minute. A hoiking throw was glanced on by Deeney for Ighalo, who showcased a blend of strength and focus to ignore Gabriel’s clumsy attempt to hug him and send a swivelling shot past David Ospina.

Chastened, breached, Arsenal creaked terribly at the back. The combination of a badly tentative Per Mertesacker and a ridiculously rash Gabriel was an open invitation to Watford. Ighalo stretched but could not quite make the most of a chance to double the lead.

Then came the moment that transported 9,000 Watford fans into a euphoric place as the second goal arrived in spectacular fashion right in front of them. Deeney looked to terrify Mertesacker to confidently keep control and lay the ball back to Guedioura, who rifled into the roof of the net from the edge of the box. One for the FA Cup classic goal collection.

Wenger responded with a triple substitution. The momentum changed when Danny Welbeck struck. The Arsenal striker was involved in an astonishing move as Alex Iwobi hit the post and when the ball came back Welbeck lifted the chance to equalise over.

Arsenal could not summon enough to dampen Watford’s deserved day in the sun.