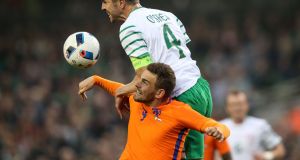 Vincent Janssen in action against Republic of Ireland in May. Photograph: Inpho

Tottenham transfer target Vincent Janssen has admitted his frustration after AZ Alkmaar rejected a bid worth around €18m for the Netherlands striker.

Spurs manager Mauricio Pochettino is searching for more forward options after missing out on a deal for Marseille’s Michy Batshuayi and has earmarked Janssen as the perfect back-up to Harry Kane. The 22-year-old finished as top scorer in the Eredivisie last season with 27 goals in just 32 appearances and forced his way into the Holland squad.

Pochettino watched Janssen in action last month in the friendly against the Republic of Ireland in Dublin but was foiled in his attempts to sign him after AZ insisted they wanted €20m.

Now the former Feyenoord youth player has hit out at his current club, insisting Tottenham’s offer is a fair price.

“I have expressed my choice to the club. In my opinion, Spurs bid a high amount,” Janssen told Dutch television on his first day of pre-season training with AZ.

Janssen, who has three years still remaining on his contract having joined from lower league side Almere City for just £300,00 last summer, is also wanted by German side Wolfsburg.

“I indicated that I would take the next step and want to get away from the club. They know and are aware of,” he added.

“It’s a shame, I would have wished that it would go a little faster. Sure it’s fine to train again. AZ is a fantastic club. But I want to make that next step for my development.

“Ultimately I hope to shake people’s hand here and walk out of the door on good terms.”

It is understood that Tottenham proposed to spread the transfer-fee payments over a three-year period - a suggestion that has so far been resisted by AZ.

“We don’t want to let Vincent go for €18m at the moment. We hope he stays,” said technical director Max Huiberts.