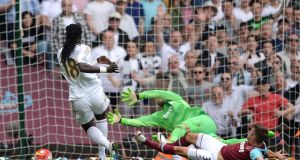 An injury-hit Swans side with little to play for should have been easy pickings for the Hammers, who were unbeaten at home since August and still in with a slim chance of a top-four finish.

Throw in the fact that this was the penultimate match at the Boleyn, a ground Swansea had won at just once in its 112-year history — back in 1956 — and this was a result hardly anyone saw coming.

Diafra Sakho pulled one back, with the help of a final touch from Stephen Kingsley, but fellow sub Bafetimbi Gomis killed West Ham off in stoppage time.

A hefty defeat left the Hammers facing a nervy final two games to make sure they secure at least Europa League football at the Olympic Stadium next season.

The afternoon had started encouragingly enough for the hosts, with player of the year Dimitri Payet seeing a curler tipped wide by Lukasz Fabianski inside two minutes.

Payet then lined up two free-kicks but, to the frustration of an expectant crowd, sent the first narrowly over the crossbar and the second inches wide.

Swansea had still scarcely ventured out of their own half until, in the 25th minute, Ki collected the ball on the left and pinged it to Kyle Naughton on the right.

Ki’s quick-thinking had caught the West Ham backline square and when Naughton fizzed in a low cross Routledge was unmarked as he applied the finish.

The Hammers should have equalised when Fabianski flapped at another Payet corner and the ball fell to Angelo Ogbonna, but the defender blazed over an open goal.

This time Kingsley raced past Victor Moses and whipped in a cross which found Ayew for another tap-in.

In first-half stoppage time neither Carroll nor Manuel Lanzini could convert Michail Antonio’s cross to half the defecit.

And five minutes after half-time Swansea made it three, Modou Barrow bamboozling Antonio on the byline before cutting the ball back for Ki to slot home.

West Ham belatedly attempted to hit back and did find the net when Sakho stabbed in the rebound at the second attempt after Fabianski had saved Antonio’s header.

But despite finishing the match with four strikers they conceded another when Ayew and Gomis broke through, the latter turning the ball past Darren Randolph.

Dwight Gayle scored a second-half brace to seal a 2-1 victory against Stoke and ensure Crystal Palace’s place in the Barclays Premier League next season.

Alan Pardew’s side knew that a draw would be enough to secure their top-flight status in a campaign which has dramatically fallen off the rails since the turn of the year.

Charlie Adam opened the scoring for Stoke midway through the opening period, but Gayle struck twice after the interval to ensure another season of Premier League football at Selhurst Park.

“We’re feeling glad all over” sung the Palace supporters at the final whistle, and with their top-flight status now in tact and a Wembley date to look forward to, it was hard to disagree.

Matt Ritchie’s late goal salvaged Bournemouth a 1-1 draw as the Cherries condemned West Brom to an eighth Premier League game without a win.

Craig Gardner missed a first-half penalty for the Baggies, who were unable to hold out in a low-quality clash where Eddie Howe’s Bournemouth ended their three-match losing streak.

The draw leaves both teams locked on 42 points with one game to play, with Bournemouth clearly the happier having secured their top-flight future in their maiden Premier League campaign.