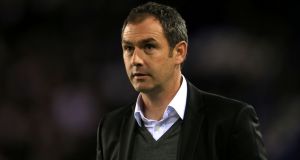 Paul Clement has been appointed as Swansea’s new manager after choosing to leave his role as Carlo Ancelotti’s assistant at Bayern Munich to take over at the Premier League’s bottom club.

The 44-year-old former Derby boss has signed a two-and-a-half year deal and will watch his new side from the stands at Crystal Palace on Tuesday night, with club stalwart Alan Curtis in caretaker charge.

Joining Clement at the Liberty Stadium from Tottenham are Nigel Gibbs, who will be assistant coach, and Karl Halabi.

Clement emerged as Swansea’s number one target after Wales manager Chris Coleman, who played nearly 200 games for the club at the start of his career, rejected the opportunity to take over at his home town club.

“We are delighted with the appointment of Paul Clement as our new head coach,” Swansea chairman Huw Jenkins told the official club website.

“Paul has not only worked with some of Europe’s biggest football clubs, but also the very best players in the world.

“Swansea City’s strength over many years had been the quality of the football coached on the training field. That has always been at the forefront of our success.

“There is no doubt in my mind that Paul can not only help us regain that footballing belief, but also restore some much needed pride back into the football club.

“Everyone connected to the club is fully behind the appointment and we see this a typical Swansea City choice.

“It looks a good fit to get us back on track and provide one of the best young coaches in Europe with the chance to develop his own career and become a leading coach in his own right.

“I’m sure every Swans supporter, like me, would want to wish Paul the best of luck at the club and that he enjoys his time with us at Swansea.”

Clement becomes Swansea’s third manager of the season and replaces Bob Bradley, who was sacked on December 27th after a record of two wins from 11 games. Bradley took over from Francesco Guidolin, who departed on October 3rd after a poor start to the season.