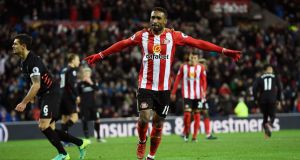 Jermain Defoe scored twice from the spot as Sunderland earned a priceless point at home to Liverpool. Photograph: Getty/Stu Forster

Wearside proved an unexpectedly hazardous staging post on Liverpool’s road towards a potential title with two Jermain Defoe penalties restricting Jürgen Klopp’s side to an unwanted draw which leaves them five points behind the leaders, Chelsea.

David Moyes can only dream of being in second place these days but at least his third-bottom team remain in touching distance of safety as he strives to not only keep hold of Defoe but persuade Ellis Short, Sunderland’s reluctant owner, to invest in some new players this month.

If his former England striker was, once again, Moyes’s saviour, Liverpool’s Sadio Mané discarded two points with a ludicrous handball. That watershed came 12 minutes after Mané had given the visitors the lead for the second time on an afternoon when Daniel Sturridge also scored, and impressed, before limping off, apparently in considerable pain.

Jordan Pickford’s knee injury has offered Vito Mannone a chance to show off his goalkeeping reflexes and they looked reassuringly sharp as the Italian dived smartly to repel Sturridge’s early low shot before tipping away Georginio Wijnaldum’s curler for a corner.

It was a bitter Wearside afternoon with temperatures hovering just above freezing but Mannone must have felt increasingly warm as he kept out another curving shot, dispatched by Sturridge this time, following some fine approach work on Roberto Firmino’s part.

Mannone though is only human and, after his defence had failed to deal with the fallout from a corner, Dejan Lovren’s miscued shot bounced into Sturridge’s path and, from around six yards out, the sometime England striker directed a looping header into the net.

While that was only Sturridge’s second Premier League goal of the season, Defoe soon registered his 10th, equalising from the penalty spot after Didier Ndong stole between Wijnaldum and Ragnar Klavan as he accelerated into the area and the centre-half sent him tumbling. Although Simon Mignolet guessed the kick’s flight-path, correctly, Defoe’s low, unerring execution proved far too good for the Belgian as the ball arrowed snugly inside a post and on into the bottom corner.

Within minutes of levelling, Sunderland should have taken the lead in the wake of Adnan Januzaj’s fancy footwork. Mignolet performed wonders to get a hand to Defoe’s shot and push it away before Fabio Borini directed the rebound wide.

Moyes had dubbed his players “useless” – among other things – after they surrendered 4-1 at Burnley on Saturday but re-arranged in a 4-4-1-1 formation they – initially at least – looked in much better shape.

So much so that Mignolet, previously of this parish, had been required to make a couple of decent saves from Defoe and then Jack Rodwell before Sturridge scored the opener. Sunderland had lost all 33 of the previous games Rodwell had started for the club but, newly recovered from his latest injury, he seemed in unusually effective mode.

Hopes this might be the day that unfortunate cycle was broken were sustained by Mannone as he creditably denied Sturridge a second goal shortly before a half-time interval in which Klopp replaced James Milner – whose style had been cramped by an early booking – with Alberto Moreno at left-back.

Considering his defence was lacking the injured Lamine Koné – who, along with Wahbi Khazri and Ndong is, in any case, about to depart for Gabon and the Africa Cup of Nations – Moyes must have been reasonably pleased with its new found resilience.

Klopp, meanwhile, simply looked frozen through as he shivered on the touchline. The German was furious about having to play this game less than 48 hours after his side’s New Year’s Eve tea-time win over Manchester City and as Liverpool’s attempts to bypass John O’Shea and Papy Djilobodji became increasingly jaded those dire prophecies of physical and mental fatigue appeared close to fulfillment.

Even so, the visitors – missing the injured Jordan Henderson – continued to dominate possession to a sometimes embarrassing extent and should really have regained the lead when Nathaniel Clyne crossed sublimely but Mané somehow missed the most inviting of openings.

Moyes though was convinced his team should have had another penalty after Borini’s chip struck Emre Can on an arm but it did not look deliberate and referee Anthony Taylor had no hesitation about waving play on.

Things seemed to be drifting towards a draw when Liverpool finally got a grip of themselves and appeared to decide they were not quite all out of ideas after all.

This new mood was reflected by a menacing cameo featuring Adam Lallana and Sturridge exchanging passes before Lallana’s cute backheel cued the striker up for an angled shot Mannone performed acrobatics to divert to safety.

When the resultant corner was inadvertently flicked on by Djilobodji, it fell to Mané who, completely unmarked at the far post, gleefully guided it into the net from close range. Not for the first time, Sunderland paid the price for slapdash defending with their protestations Mané had been in an offside position irrelevant as Djilobodji’s intervention played him onside.

Creditably refusing to fold, Moyes’s players rallied and won another penalty with six minutes to go after Seb Larsson’s free-kick was handled by, of all people, Mané who blatantly, ridiculously, stuck his arm up. Forward stepped Defoe again and, this time, he sent Mignolet the wrong way as the ball flew low into the opposite corner.

With Sturridge having limped off after being accidentally caught by Djilobodji and replaced by Lucas Leiva, Liverpool were suddenly limited in attack and,this time, had no riposte.