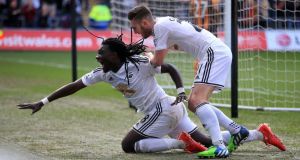 Hull failed to ease their relegation fears as Swansea closed in on their best-ever Barclays Premier League points total with a 3-1 win at the Liberty Stadium.

Ki-Sung yueng and Bafetimbi Gomis gave Swansea a two-goal cushion at half-time which ultimately helped them move on to 46 points, just one short of their best total under Brendan Rodgers in the 2011-12 season.

Paul McShane halved the deficit five minutes after the break from a set-piece but Hull’s cause was damaged almost immediately when David Meyler was sent for a reckless challenge on Kyle Naughton.

Swansea were well on top from that point but had to wait until injury time to kill the game off, Gomis running unopposed from his own half to latch onto Gylfi Sigurdsson’s long ball out of defence and finish with a deft chip over Hull goalkeeper Alan McGregor.

Hull remain three points above the relegation zone but they will be casting nervous glances at the Burnley and Sunderland games on Sunday and appear to have a tricky seven-game sequence to end their season.

Liverpool, Manchester United and Arsenal all have to visit the KC Stadium while Hull’s remaining away games include trips to Southampton and Tottenham.

QPR grabbed a survival lifeline with a stunning 4-1 win at 10-man West Brom, only their second away victory of the season.

Albion disintegrated in the first half and, while Victor Anichebe pulled a goal back after the break, they could not fight back and had Youssouf Mulumbu sent off late on.

QPR are now a point from safety and go to fellow strugglers Villa — who lost 3-1 at Manchester United — on Tuesday after ending a five-game losing run.

The Baggies are not safe yet, eight points above third-bottom Rangers, and host rock-bottom Leicester next week.

Rock-bottom Leicester’s Barclays Premier League survival bid received a much-needed shot in the arm as a late goal from substitute Andy King steered them to a 2-1 home victory over West Ham.

The Foxes raced into a 12th-minute lead through Esteban Cambiasso’s fine strike and were awarded a penalty three minutes later when Carl Jenkinson brought down Leonardo Ulloa, but David Nugent’s spot-kick was saved by Adrian.

It looked for a long time as if Nigel Pearson’s side would be left regretting that failed attempt after casual play from them at the back saw West Ham equalise on 32 minutes, Cheikhou Kouyate firing in.

Leicester spurned further decent chances after the break, while Kouyate hit the post at the other end.

But the hosts made off with a vital three points in the end thanks to King’s scrappy finish with four minutes of normal time remaining.

The result — Leicester’s first win in nine league games and only their fifth of the campaign — saw Pearson’s basement boys cut the gap between themselves and safety to four points, with eight more matches to play.

Meanwhile, it was another bad day for West Ham boss Sam Allardyce, his ninth-placed side now having only enjoyed one win in nine league fixtures.