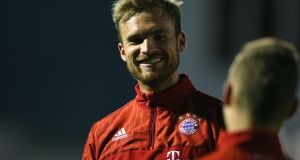 Bayern Munich’s Jan Kirchhoff has arrived in Sunderland to discuss a contract as the Premier League club hope to complete the signing. Photo: Getty Images

Sunderland boss Sam Allardyce is closing in on his first January signing after Bayern Munich defender Jan Kirchhoff arrived in to the north east.

The 25-year-old headed for England to hold talks and undergo a medical after being left out of the Bayern squad which flew to Qatar for a mid-season training camp on Wednesday.

A statement on the club’s official website, www.fcbayern.de, said: “The travelling party does not include Jan Kirchhoff, who is away with his agent concluding negotiations for a possible transfer.”

Kirchhoff appears to be surplus to requirements in Munich after spending last season on loan with Bundesliga rivals Schalke, with injuries having limited his involvement at the Allianz Arena.

He has made just 10 appearances for the club in the two and a half years since he signed from Mainz, all of them as a substitute and just one this season in the 1-0 German Cup victory over Darmstadt last month.

Allardyce’s concentration on defenders — he has also been heavily linked with Lorient’s Lamine Kone — is understandable with Younes Kaboul’s hamstring injury set to sideline him into February, an absence which has prompted 36-year-old Wes Brown’s return to the team for the last two games.

Skipper John O’Shea too is approaching the end of his career at 34 and whatever role the senior pair have to play during the remainder of the current campaign, they will need to be replaced sooner rather than later.

The Black Cats have conceded 39 goals in their 20 Barclays Premier League games to date this season and scored just 22, and their failings at both ends of the pitch have left them in 19th place, four points shy of safety.

Allardyce has traditionally built from the back and while getting the best out of his strikers is also a focus, he is convinced that clean sheets will provide the foundation for yet another survival bid.

Meanwhile, Sunderland have been credited with an interest in Italy striker Ciro Immobile, currently on loan at Spanish club Sevilla from German outfit Borussia Dortmund, while sources on Wearside have dismissed links with former Newcastle frontman Andy Carroll.