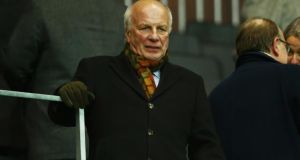 Greg Dyke’s recent FA commission concluded that one reason why England doesn’t develop as many good players as Germany is a relative shortage of facilities. Photograph: Getty Images

The 1988-89 Shoot Annual is only 27 years old, but seems older. One feature profiles John “Fash the Cash” Fashanu, Wimbledon’s £2,000-a-week star. He lives in a £600,000 Hampstead mansion, and his extravagant lifestyle is part-funded by business interests outside the game.

“I use Friday evenings to catch up on paperwork,” The Cash reveals. “I take the phones (yes, he’s got more than one) off the hook and I get down to some pretty hard work. The best time to work is at the still of the night when there are no distractions. There’s something satisfying about seeing a huge pile of papers gradually whittled away to nothing.”

In 2015, many Premier League players earn twice as much in a week what The Cash earned in a year. The reason is TV money, but in 1988, footballers still weren’t sure about TV. Shoot asked six top players: “Should there be more or less football on TV, or is it about right?”

Remember that in 1988, English TV coverage of football consisted of one live league match per week, highlights on Football Focus and Match Of The Day, and occasional internationals.

Even this was too much for West Ham’s Alvin Martin. “There should be less, definitely. I’ve never been a fan of football on television. Saturday night highlights are alright but not live matches every week.” Newcastle’s Paul Goddard was also sceptical: “Possibly too many live games.”

Derby’s John Gregory sat on the fence. “The TV companies have it about right at the moment,” while Celtic’s Pat Bonner took an edgier line: “I think football needs TV.” Arsenal’s Lee Dixon went further: “There’s too little football on TV for my liking”. Then there was Aberdeen’s Alex McLeish, whose enthusiasm for TV football made him sound almost unhinged: “I can’t get enough of it! I’ve had a satellite dish installed so I can watch games from all over Europe!”

Only McLeish was attuned to the shape of a future in which millions would pay to have football constantly on their TV. Back in ’88, Alvin Martin would have been appalled, but now he works for TalkSport, so – every cloud. People in general are hopeless at predicting the future. Nothing more starkly highlights our limited understanding of the world around us than our efforts to foresee how things will be in a few years’ time.

“It’s a simple matter to extrapolate from history and project into the future,” Timan says. “Consider salaries of sports greats of 30-40 years ago. Today they’re four or five times bigger. By 2000 they can be expected to quadruple again.”

Last week, the Premier League revealed that Sky Sports and BT Sport will pay £5.136 billion for the UK rights to three years’ worth of live matches. Does the enormous sum reflect Sky’s confidence that demand for the Premier League will continue to grow, or their fear that without it, they don’t have much of a product? Not even Sky can say for sure.

If the future looks complicated for Sky, the outlook for the Premier League is simpler. There’s a choice to be made.

There is an immutable law of economics: if you have more money than you know what to do with, you will end up blowing it on stupid things.

If the Premier League passes all of the new TV money on to the clubs, they will blow it on wages and transfer fees, ratcheting up their cost base to no advantage. The only people who will gain are directors, players and agents at the high end of the professional game.

At an average cost of £550,000 per pitch, the Premier League could easily fund 1,000 of these pitches over the period of the next TV deal, while still increasing the sums flowing to their clubs. The whole football community would gain from what would be a genuine contribution to national well-being.

Ken Early: Another Mourinho masterclass in going through the motions 06:30
Game Changers: Stephen Cluxton’s indelible mark on Gaelic football 06:21
Peter Byrne: A gruff exterior hid the sensitive soul and warmth of Jack Charlton 06:16
Malachy Clerkin: Sleep well Jack, you made us all happy 06:00
Mark Lawrenson: Searing honesty and a sense of being in control defined Jack Charlton 06:39