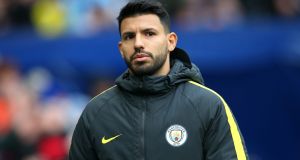 Sergio Agüero has cast doubt over his future at Manchester City after being left out for a second match in a row in favour of Gabriel Jesus, who scored both goals in a 2-1 win at home to Swansea City on Sunday.

The striker said it would be down to the club to decide in the summer whether to keep him. Senior City officials reacted by privately insisting that Agüero would not be allowed to leave.

Having been left out by the head coach, Pep Guardiola, for Wednesday night’s 4-0 win at West Ham United, Agüero was on the bench as Swansea were beaten by an injury-time winner at the Etihad Stadium.

With Jesus opening the scoring in the first half – before Gylfi Sigurdsson’s 81st-minute equaliser – it was a frustrating day for Agüero, who came on as a late replacement on Sunday but failed to add to his 18 goals for the season.

Asked about his future, the 28-year-old said: “No, no I don’t want to leave. I have to help the team as much as I can in these three months. Afterwards we’ll see what the club wants to do with me.

“In three years, my contract is up – that’s why I say I’m happy at the club. In these last three months that are left I have to help the club and, as I say, the club will decide if I have a place here or not.

“Sometimes this happens. When you’re on the bench you have to wait for your opportunity. I have three months to do my best and try to help the team and we’ll see what happens with my future. He [Jesus] is a great player. He’s a very young player but he will learn a lot at City and he will have a great future at the club.”

Agüero admitted he could learn from the 19-year-old. “Yes, at the moment I have to watch what he does, to learn, it could be a little bit. I am how I am. I have spent a lot of years in Europe playing the same way.”

Of a meeting Agüero had with Guardiola and the player’s agent recently, the striker said: “It was things to do with the club, nothing strange. Private things that have to stay inside those walls.”

Guardiola said Agüero had taken being left out in the correct manner. “It is perfect, don’t worry about that,” he said. “Of course he wants to play. It must not be easy. I understand that. But Sergio remains one of the most important players in our squad and [with] what we have to do, he will be so, so important.

“He is going to play a lot of games, with Gabriel and without Gabriel, but today I decide to continue with these three guys [Jesus, Leroy Sané and Raheem Sterling].”

Jesus scored a debut goal at West Ham. Of his contribution against Swansea, Guardiola said: “He made again a lot of things, without the ball, with the ball. We can use him as a third man and give an assist with Kevin [De Bruyne], with David [Silva].

“He is a guy in the box with an instinct to score goals. When he played with Sergio [for eight minutes against Tottenham Hotspur] they both played really well. He can run for 90 minutes and the long balls, he can win against taller central defenders. He is 19 years old and we are delighted about what he has done.” – (Guardian service)