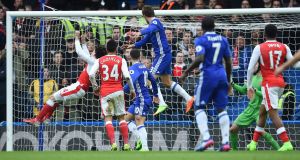 Arsene Wenger claimed Chelsea’s opening goal was a clear foul after his Arsenal side were beaten 3-1 at Stamford Bridge by the Premier League leaders.

Marcos Alonso opened the scoring when he climbed above Hector Bellerin to head home a rebound, but the Arsenal defender soon left the pitch injured after being caught by an elbow in the incident.

Eden Hazard doubled the lead with a wonderful solo goal early in the second half before former Gunners captain Cesc Fabregas finished them off with five minutes to go, lobbing home after a mistake from ex-Chelsea goalkeeper Petr Cech.

“The second goal was a little bit of a killer for us,” Wenger added on Sky Sports 1. “It made it much more difficult for us. We had the right attitude but lacked a little bit of experience. Even our experienced players did not play their best today.”

Gary Cahill admitted thoughts of revenge gave Chelsea added motivation after their 3-0 defeat at the Emirates earlier this season.

Antonio Conte admitted he was disappointed to see his side concede a late consolation goal, but could not otherwise complain.

“It was a good game,” he said. “It wasn’t easy against a really good team with a lot of good players. We played a good game with good intensity and good organisation. I’m really pleased for my players because I think they are deserving of this.”

Eden Hazard’s goal to make it 2-0 was the highlight of the afternoon.