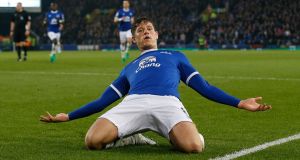 Ronald Koeman had asked Ross Barkley to take responsibility and he obliged at Goodison Park, not with the requested decision about his future but with the winning goal against Watford as Everton secured their 13th home win of the season. Time will tell, and possibly quickly, whether it is Barkley’s farewell gift to his boyhood club.

The Everton midfielder scored only his fifth Premier League goal of a turbulent campaign to seal victory and delivered an encouraging response to continuing criticism before being substituted late on. Barkley departed with applause from all four sides of the stadium and the home crowd responded in kind as they await a definite answer over his contract.

Koeman could not have been clearer before the game on Everton’s position towards Barkley and the silence on his part over a new contract. Basically it is sign or be sold, preferably with a decision from the England international by the end of the season, but the cold shoulder did not extend to the Everton manager’s team selection with Barkley starting what could prove to be his final home game at Goodison Park.

The midfielder was Everton’s brightest outlet in the early stages, the scrutiny and warnings over his future having no detrimental effect, and engineered the first chance amid a sudden downpour at Goodison. Having exchanged passes with Idrissa Gana Gueye on the edge of the Watford penalty area, Barkley weaved his way into space before forcing Heurelho Gomes into a decent save low to his right. The veteran keeper also saved well from Phil Jagielka before a delightful flick from Barkley took two Watford players out of the game and sent Tom Davies driving at the visitors’ goal. The 18-year-old used Romelu Lukaku’s run as a decoy and released a shot from 25 yards that Gomes turned away for a corner.

Walter Mazzarri’s tall, powerful side and 3-5-2 formation were a formidable obstacle to break but carried a potent threat of their own. Sebastian Prödl was just unable to provide the final touch to a goalmouth scramble after Troy Deeney connected with a José Holebas corner. Stefano Okaka shot narrowly wide having been allowed to run from the halfway line and Adrian Mariappa headed over Joel Robles’ crossbar from an inviting cross by Holebas.

The initial promise and goalmouth activity gradually faded, however, and there was a distinct end-of-season air to proceedings long before the half-time whistle brought a release.

Watford lost the defender Christian Kabasele to what appeared a thigh injury while Koeman replaced Mason Holgate with Enner Valencia during the interval in an attempt to inject more urgency into the Everton attack. The knock-on effect was Davies’ conversion into a makeshift right-back, a strange switch that was immediately tested when Daryl Janmaat broke down the left and crossed low for Deeney. Watford’s captain was well-placed to convert but, under pressure from Leighton Baines, steered his shot well wide. Everton capitalised almost immediately.

There were groans around Goodison initially when Barkley collected Jagielka’s clearance out of defence, spotted Valencia free on the right and elected not to pass. The boyhood Evertonian seemed determined to mark the occasion with a goal and ran on, Prodl backing off all the way, until sweeping a right-footed shot from 22 yards beyond Gomes, who stepped to his left just as the ball sailed to his right.

Kevin Mirallas, who it was confirmed before kick-off had signed a new three-year contract, stung the goalkeeper’s palms from distance while Morgan Schneiderlin went close with a header moments before denying Okaka at the other end of the pitch with a superb challenge. Robles also thwarted the burly striker as Watford almost levelled late on.