Richarlison leaps the highest to see Everton past Wolves 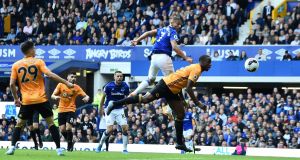 Marco Silva was tempted on to the pitch at full-time to congratulate his Everton team on a sixth consecutive home win but one man in particular was the target of the manager’s victory stroll. Richarlison, battered, bruised but triumphant, was greeted with a deserved embrace by the Everton manager after increasing Wolves’ exhaustion at Goodison Park.

The Brazil international scored two fine goals to leave Nuno Espírito Santo’s team without a Premier League win, the second a superb match-winning header just as it seemed the visitors had salvaged a hard-fought point. Flawless in Europe but winless in the Premier League, Wolves looked shattered at the end of a pulsating contest that stretched not only their resources but their defensive limits. Richarlison was chiefly responsible for their unease, taking a battering down the right – resulting in Willy Boly’s late dismissal – and responding with punishment of his own.

Only three goals were scored in Everton’s first three games of the new Premier League season. That tally was equalled inside 12 minutes at Goodison as defensive lapses and a willingness to attack in numbers from both teams produced a captivating start. The body language inside the technical areas suggested the respective managers did not share that view.

Everton and Richarlison were gifted the opening goal when Conor Coady made a hash of mopping up an attack that had broken down on the left. A heavy, misplaced back-pass from the Wolves’ captain put goalkeeper Rui Patrício in trouble and, at full stretch, his attempted clearance cannoned off young striker Moise Kean. The ball broke across the penalty area for Everton’s Brazil international and he steered an awkward finish into the top corner.

An early breakthrough should have been ideal for a team with Everton’s defensive record on home soil. Silva’s side had not conceded in the Premier League at Goodison for 207 days, when Gabriel Jesus sealed Manchester City’s win here in February, but Wolves levelled swiftly and cheaply. Adama Traoré was the architect with a typically powerful run down the right that brushed aside Lucas Digne. Séamus Coleman was unable to clear Traoré’s low centre and his touch fell perfectly for Romain Saïss to convert at close range.

Wolves’ travelling contingent were still revelling in the Moroccan’s goal when Everton struck again. Richarlison was involved once more, releasing Gylfi Sigurdsson down the right with an improvised touch. The Iceland international swept a perfect cross to the back post where Alex Iwobi arrived unmarked – having been abandoned by Traoré – to bury a thumping header beyond Patrício. Iwobi, one of three Everton players making their full home debuts, along with Kean and the immaculate Fabian Delph, has been told by Silva to improve his return in front of goal. Two headers in the space of five days, having also scored in the Carabao Cup win at Lincoln on Wednesday, is an encouraging start.

The game and the chances continued to flow. Saïss headed tamely at Jordan Pickford from a cross by Patrick Cutrone, a lively and physical presence on his first league start since arriving from Milan in the summer. Cutrone himself was denied by a fine save by the Everton keeper plus a vital block from Michael Keane when he seemed certain to restore parity, while Yerry Mina and Coleman also had opportunities to extend the home side’s lead.

Delph was a calm, intelligent influence in central midfield where Wolves, without João Moutinho in their starting lineup and with Rúben Neves below par, lacked the finesse that usually complements their powerful approach. The latter attribute paid dividends, however, when Santo’s team equalised for a second time with 15 minutes remaining. Willy Boly was first to a long throw launched into the Everton penalty area by Ryan Bennett. Mina and Digne were slow to react to the defender’s flick and Raúl Jiménez ghosted in on the blind side to score with a close-range header, taking a kick in the face from Digne in the process.

Once again, Everton took the equaliser like a personal insult and, as in midweek, Digne and Richarlison combined to seal what could prove a significant victory. The French left-back drove to the corner flag before delivering a telling cross into the heart of the Wolves’ box. Boly stood waiting to clear. A fatal error. Richarlison had already sensed the opportunity and, with a perfectly timed leap, sent a glancing header creeping inside Patrício’s far left-hand corner. Boly was sent off in stoppage time for a second bookable offence on the Brazilian menace. His pace, directness and finishing were simply too much for Wolves to contain. - Guardian