New claims that a number of clubs, not just Chelsea, paid off victims with hush money 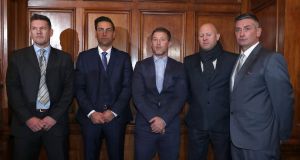 Prominent figures from the football world, including a former manager described as still working “in the senior echelons” of the sport, have repeatedly been named by some of the players alleging sexual abuse in the escalating crisis that has also led to new claims about a number of clubs, not just Chelsea, paying off victims with hush money.

Lawyers representing a new independent body, the Offside Trust, that has been set up to help the victims and their families described it as “extremely worrying” that, only three days after its formation, there had already been numerous first-hand accounts from former and current professional footballers directly implicating people who were still involved in the game and “need further investigation”.

Other victims have informed the trust they were offered large sums of money as long as they signed confidentiality agreements to prevent the clubs suffering damaging publicity, in the same way that Chelsea paid £50,000 to their former player Gary Johnson in an attempt to stifle the allegations against Eddie Heath, a scout for the London club in the 1970s.

Chelsea issued an apology over the weekend but Ed Smethurst, representing Andy Woodward and Steve Walters, the two players whose interviews in the Guardian opened what the Football Association chairman, Greg Clarke, has described as the biggest crisis he has ever known within the sport, said there was already clear information that other clubs had been part of similar cover-ups. Asked how many clubs he was referring to, he said it was “less than five” but also reiterated that the trust had been operating only since Friday. “It is unfurling as we speak,” he said.

Smethurst went on to say there were grave misgivings about the FA’s independent inquiry, pointing out that “a lot of people have come forward who have said they don’t have trust the establishment”, but his most alarming revelation was that some of the people identified as offenders were still working within the sport.

“There are certain names who do come up repeatedly,” he said. “I’m not going to divulge specifics but there are absolutely people in the game today who victims have spoken to me about. There are specific allegations against specific individuals, many of whom have been rumoured to be involved for a very long period of time, some of whom still work in the senior echelons of football, and it’s extremely worrying.”

Smethurst described it as a “tidal wave” of calls since Woodward spoke to this newspaper and was asked about the fact that some of the coaches who had previously been under suspicion were still working in football. “Is it a surprise? No. There are other individuals in the game, past and present, where further action could, and should, have been taken,” he said.

The latest police figures, issued last Thursday, stated that around 350 alleged victims had made official complaints. Those involved 55 clubs, at professional and amateur level, but the players who have driven the campaign are aware of many others with similar stories who do not want to go public.

“I’ve had about 50 different ex-players who have contacted me to say things have happened to them,” Walters said. “Andy has had a similar number of calls. Some have told me they’ve been groomed, others had a certain level of abuse, some are horrific stories. It’s never-ending. I had one call on the way here today. There are so many more. I’m getting phone calls every day. You wont believe how many are still to come out.”

Walters, sitting next to Woodward at an emotional press conference to launch the trust, added: “Fair play to Chelsea – it’s too little, too late, but they have put their apology out there in a sincere manner. Other clubs, though, have got their heads in the sand. These children trusted them and the clubs have let everyone down.”

Two individuals who previously worked together at the same club have repeatedly been named – one no longer in employment – and Smethurst said some of the players making complaints felt unable to waive their anonymity. “Unless you’ve been a victim of something like this I think it’s very difficult for an outsider to understand. Some want to talk about it, but don’t necessarily want the furore. They might not want their parents or children to know, or they might think that there is nothing they can do about it, or that it might be swept under the carpet.”

The FA has appointed a QC, Kate Gallafent, to oversee its investigation but some of the victims have questioned whether it can truly be considered an independent inquiry if the governing body is paying the person investigating its own role.

Smethurst, working on a pro bono basis for the trust as managing director of the Manchester firm Prosperity Law, made the same point and encouraged other players to come forward even if they had agreed payments from clubs to remain silent.

“Certainly, allegations have been made by victims that confidentiality clauses have been used in relation to other clubs,” he said. “It does happen. I can’t speak about what Chelsea’s lawyers advised them but, from a campaigning perspective, we think some things are so important – the protection of children for one – that clubs should not hush these things up and tie victims up in confidentiality.

“There is a wider perspective here about the protection of the victim and stopping these things from reoccurring. It’s often the case if there is an abuser that there are other people who know, or who have turned a blind eye, so I would say even if the person is dead I would not encourage the use of confidentiality.”