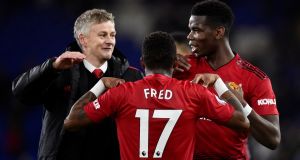 Ole Gunnar Solskjaer enjoyed a dream start to life at the helm as Manchester United wound back the clock at Cardiff and scored five goals in a Premier League match for the first time since Alex Ferguson retired.

Poor performances and notable background issues cost divisive Jose Mourinho his job on Tuesday, with the Old Trafford giants turning to a fan favourite and former reserve team boss for the rest of the campaign.

United could scarcely have wished for a better start as they struck five in the league for the first time since Ferguson’s final match at the helm in May 2013.

Entertaining, coherent and attack-minded — it was all that United had not been under Mourinho.

The players looked re-energised under Solskjaer, with the recalled Paul Pogba winning the free-kick struck home by Rashford and providing Herrera with the assist for his deflected second.

Victor Camarasa pulled one back from the penalty spot, but United responded with another as Martial ended arguably their best move of the season smartly.

“Ole, Ole, Ole” rang around the Cardiff City Stadium — a ground where Solskjaer remains unpopular after his torrid time as manager in 2014 — long after Lingard scored a penalty and rounded the goalkeeper to finish off the victory.

United still have a lot of work to do if they are to finish in the top four, but this was the kind of display that justified the change in management.

Neil Warnock’s spirited Cardiff side faced an uphill battle to secure a fourth successive home win from the third minute.

Pogba — one of Solskjaer’s four changes — earned a free-kick that Rashford hit sweetly from nigh on 30 yards, sending it swerving into the bottom right-hand corner.

The visiting bench jumped off their seats in celebration, with Solskjaer clenching his fists at a goal followed by more positive play but little in terms of clear-cut chances.

But as the half-hour mark approached, Pogba created a timely second.

The World Cup winner showed strength to knock Sol Bamba off the ball and then found Herrera with a sublime pass. The Spaniard tried his luck from distance, with his attempt taking a deflection off Greg Cunningham and flying into the top right corner.

It was a gut punch that could have grounded Cardiff, but they quickly got themselves back into proceedings as Rashford was adjudged to have handled in the box.

United’s protestations fell on deaf ears and Camarasa struck a fierce penalty out of David De Gea’s reach to give the home side hope — if only for a few minutes.

Martial galloped from the halfway line and passed to Pogba, who quickly played on to Lingard. The attacking midfielder laid it off with his first touch for Martial to collect and prod home, completing a superb team move.

United’s raucous travelling fans were enjoying this all too rare glimpse of their players’ true potential.

Their side continued in the ascendancy after the break, with Rashford forcing a save out of Neil Etheridge before fleet-footed Lingard was brought down in the box as he tried to dash between Bamba and Sean Morrison.

Referee Michael Oliver pointed to the spot and Lingard sent the Cardiff goalkeeper the wrong way.

The travelling support began to celebrate a fifth as centre-back Victor Lindelof, given the licence and the confidence to bomb forwards, played in Rashford, but his strike went just wide of the far post.

Josh Murphy was denied by De Gea in a rare voyage forward by the home side, before Etheridge superbly tipped over Pogba’s dipping effort. Phil Jones was denied from the following corner.

Bamba came close and Kenneth Zohore was denied as play became stretched, with United getting a fifth at the death as Pogba slipped in Lingard to round Etheridge and slot home.