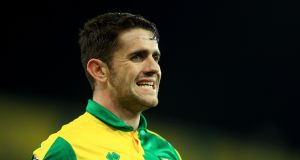 Norwich went top of the Championship as a 3-1 victory over Burton allowed them to take advantage of Huddersfield’s defeat at Reading.

Martin Olsson grabbed only the third league goal of his Canaries career with a close-range finish in the 29th minute to put the home side in front.

A Lucas Akins equaliser at the start of the second half was immediately followed by a Jacob Murphy goal before Ivo Pinto secured a fourth straight league win for Alex Neil’s men, despite Irish international Robbie Brady missing a penalty after Tom Flanagan was sent off for handball.

Newcastle boss Rafa Benitez admitted the Magpies only have themselves to blame after his team dropped more points at Aston Villa. Aaron Tshibola’s late header earned the hosts a battling 1-1 draw after Tommy Elphick’s first-half own goal almost gifted the Magpies victory.

The visitors were on top for long spells and Dwight Gayle and Mo Diame wasted fine openings before Tshibola levelled with just three minutes left. The draw left Newcastle fifth, four points behind Norwich ahead of the Canaries’ visit to St James’ Park on Wednesday.

Previous leaders Huddersfield slipped to a 1-0 loss at the Madejski Stadium. They faced an uphill battle after Rajiv van La Parra was sent off for dissent in only the 26th minute and the Terriers went behind 15 minutes later to a deflected Roy Beerens strike.

Reading then survived a second-half rally from the visitors to move up to fourth in the table, just behind Brighton on goal difference after the Seagulls won 2-0 at home to Barnsley thanks to a goal in each half from Glenn Murray.

Birmingham extended their unbeaten away record but had to settle for a 1-1 draw at QPR after Lukas Jutkiewicz’s opener was cancelled out before half-time by Steven Caulker’s header.

Two of the Championship’s in-form strikers were again on target. Tammy Abraham needed only 10 minutes to net his 10th goal of the season for Bristol City before second-half goals from Luke Freeman, Bobby Reid and Aden Flint completed a 4-0 thrashing of Fulham, who had Kevin McDonald sent off.

Chris Wood also scored for a fourth successive game to maintain Leeds’ revival with a 1-0 win at home to Ipswich.

Derby’s poor start to the season continued as they slumped to a 2-1 defeat at home to Blackburn. Ben Marshall missed a first-half penalty for Rovers and they looked set to pay the price when Matej Vydra finally netted the Rams’ first home league goal of the season.

Their relief was short-lived, though, as two goals in four minutes from Marvin Emnes and former Derby loanee Danny Graham turned the match on its head.

Cardiff also climbed out of the relegation zone as they came from behind to beat fellow strugglers Rotherham 2-1, Rickie Lambert netting a second-half brace after Chelsea loan man Izzy Brown had put the Millers in front.

Wolves winger Joao Teixeira opened his goal account with a double to help earn a 3-1 win against Brentford at Molineux.

Teixeira, who is on a season-long loan from Benfica, struck twice in 11 minutes at the start of the second half and although Sullay Kaikai gave Brentford hope, substitute Ivan Cavaleiro struck in stoppage time to end their four-match unbeaten run.