Niall Quinn returns to dig Fulham out of hole

Over three decades after being told by manager he had no future in football, former striker is back to help pick new one 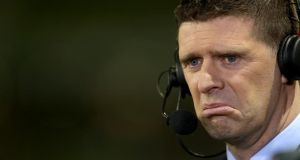 Niall Quinn had a unsuccessful trial at Fulham in 1983. Photograph: Inpho.

Easter 1983. A 16 year-old centre-half from Lourdes Celtic is on an aeroplane for the first time. The flight is Dublin-London, Aer Lingus, and awaiting the boy is a man, a famous man: “Supermac”.

Malcolm Macdonald had sprinted his way through the 1970s, scoring lithe goal after muscular goal for Luton, Newcastle and Arsenal. He scored five for England in one match. Now he was manager of Fulham, at the top of the old Second Division, and he was at Heathrow, in person, waiting for an unknown called Niall Quinn.

The next day, Supermac wanted a word.

“Son,” he said to the teenage Quinn, “you’ve no future in football. Go home, get yourself a good education. Forget about this life. I wanted to call you in here to tell it to you straight. Man to man. See, there’s two ways of doing this. There’s the polite way and there’s the truthful way. I’ll give it to you the truthful way, son. As long as you have a hole in your arse, you will never make a footballer.”

If being asked to mark Clive Allen, aged 16, was unrealistic, being informed of your non-future in such a brutal manner could have been crushing.

Quinn has had reason to consider those few days with Fulham three decades ago as he has been asked to be part of a five-man group that will help select Fulham’s next manager, and assess the club’s general state. This has brought memories of 1983, of men like Ray Harford and Terry Mancini – Macdonald’s assistants – and first-teamers such as Ray Houghton and Gerry Peyton.

But it is 2014 and it is the years ahead which focus the mind. Quinn is keen to stress that he is “one of five”, that his opinion is no more valid than another’s.

He is the least directly connected to Fulham, but the club, bought by Pakistan-American businessman Shahid Khan 14 months ago, saw what occurred under Quinn at Sunderland and view that as more relevant than any goal he scored – or his marking of Clive Allen. The panel is unusual, though it reflects well on Khan that he is prepared to ask for help.

Khan is entitled to be bamboozled. Last October, for example, Fulham won 4-1 at Crystal Palace to sit 13th in the Premier League. Kasami, Sidwell, Berbatov and Senderos were Fulham’s scorers – Martin Jol was the manager. Six weeks later, after six straight defeats, Jol was gone.

Rene Meulensteen stepped up and coaxed three wins in seven games but on Valentine’s Day, Meulensteen, too, was gone and in came Felix Magath. Fulham were bottom of the Premier League. Three wins and a draw in eight matches gave them a chance, but Fulham could not beat Hull at home and then lost 4-1 at Stoke. Magath had a reputation, well-earned after three Bundesliga titles, but after 13 consecutive seasons in the Premier League, Fulham were relegated.

The story about Magath’s idea of cheese as physiotherapy then emerged. Fulham had morphed from well-run, over-achieving Premier League club to bottom-of-the-Championship shambles.

But the past week, under caretaker Kit Symons, has brought consecutive victories and the six points have taken Fulham up to third-bottom. Symons, who was at Manchester City with Quinn, is a likeable individual who has quickly changed the mood. As it stands, Symons is favourite for the job.

But this is about more than the past week. As Quinn says: “This is not about a short-term lift.” He saw what Ricky Sbragia brought Sunderland when Roy Keane left – 19 points from the next 12 games – but it tailed off and Quinn said at the time his regret was that he had not appointed “some grey hair” to work beside Sbragia and share the load.

Sbragia left at the end of the 2008/’09 season. Sunderland had stayed up – just – and Quinn says that is what Fulham needed most in May – “to finish 17th and take a deep breath”.

Sunderland took one, and gradually chiselled out a measure of stability. Belatedly Fulham are taking one – there is no pressurised time-frame to their managerial search.

Over 30 years on from being told: “Son, you’ve no future in football,” Quinn is back at Craven Cottage – with a good education – helping Fulham out of a hole.