Manager admits suspension of Steve Thompson has undermined him 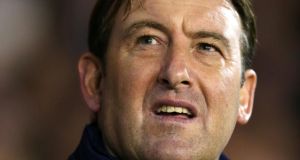 Neil Redfearn’s position as Leeds United head coach is in serious doubt after admitting the suspension of his assistant, Steve Thompson, has undermined and put him in a difficult situation.

Thompson was suspended on Thursday by the Leeds director of football, Nicola Salerno, having been at the club since December after moving from Huddersfield Town.

Leeds have not disclosed the reasoning for Thompson’s suspension and, just hours after learning the news, Redfearn held a press conference at the club’s training ground.

Leeds have been in good form in recent weeks and have climbed to mid-table security in the English Championship, despite the club’s Italian owner, Massimo Cellino, being barred until the end of the season after falling foul of the Football League’s owners’ and directors’ test. Cellino hired Salerno as director of football last summer, having previously worked together at Cagliari.

Regarding Thompson’s departure, a Leeds statement read: “The director of football, Nicola Salerno, has today (April 2nd) suspended the assistant coach Steve Thompson from his duties at the club. This is an internal matter and the club will make no further comment on this internal issue.” Guardian Service

Patrick Bamford nets hat-trick as Leeds ruin Aston Villa’s summit ambitions 22:18
Derry City blow away any relegation fears at breezy Brandywell 22:05
Dan Leavy gets back in the thick of things as Leinster trounce Zebre 21:51
Old failings come back to haunt Ireland in Kiev as Ukraine take the points 21:19
Merci beaucoup! France give up home tie and will travel to Dublin for Women’s Six Nations 19:35