Dreadful year also marked by the passing of many football greats 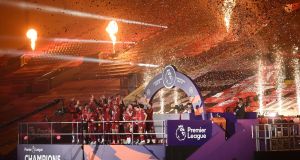 Jordan Henderson of Liverpool holds the Premier League trophy aloft as they celebrate winning the title at an empty Anfield after the victory over Chelsea in July. Photograph: Laurence Griffiths/Getty Images

Soon it will be over. Soon the unprecedented year will give way. There will be relief, not least because we will be unable to call 2021 unprecedented. It has been well and truly precedented.

The drama of 2020 has made us realise that often years simply pass by. We might struggle to recall the main events of, say, 2013. But 2020? We will remember you.

It will not be with smiles. Although there were days when it was possible to be happy and elated, particularly if you support Liverpool or Leeds or Bayern Munich or Shamrock Rovers, the atmosphere overwhelming the year inside and outside football was one of loss.

Even in their moment of domestic league triumph, sweated on for 30 long years, Liverpool had lost their Kop. Even as they went back up to the Premier League after 16 frequently miserable years away, Leeds fans were not inside Elland Road to acknowledge Marcelo Bielsa, but out by Billy Bremner’s statue trying to take in promotion and the loss of Norman Hunter, then Trevor Cherry and then Big Jack himself.

What was gained was draped in loss. Dundalk played Arsenal in Europe, but there were no supporters there. The players played on, because they could, because the fundamental elements of the game – a ball, a pitch, two teams, two nets – is beautifully simple. They will take something from that. In Dundalk they will remember Harry Taaffe, another loss.

But the larger framework of the game, based on fan attendance, fan culture and fan noise, was missing. There was visible joy on the faces of the Liverpool players as they lifted the Premier League trophy in late June – itself a date that will reveal to future generations what an odd year it has been. Jordan Henderson hoisted that Holy Grail silverware and outside, supporters ignored pandemic warnings and took their red flares to Anfield, climbed the gates, celebrated and did everything but do what they are programmed to: click through a turnstile.

It was not a communal triumph as we have understood it and the full extent of what was absent was seen poignantly five months later when the latest bad news emerged to say that Ray Clemence was gone.

Clemence was 72, but he was not that in our collective memory. In it he was young, agile, neat and always collecting trophies. His green goalkeeping jersey felt ever-present to the generation watching Liverpool’s ascendancy in the 1970s. He left Liverpool in 1981 and when he returned with Tottenham a year later, what an ovation Anfield gave him.

In an era when there was so little football shown, Clemence’s return became event television. There was not today’s tiresome obsession with close-ups and the wide-angle camera showed Clemence and the Kop as he ran towards them. Thousands upon thousands of pair of hands are seen saluting their hero, a gesture that was spontaneous, heartfelt and moving. To see the footage again in 2020 was to appreciate all the more what was not there in June.

A remark that sticks in the mind comes from May 2016 as West Ham United prepared to leave Upton Park for the so-called London Stadium. It came from Simon Inglis. The author of the seminal book The Football Grounds of Great Britain (1983), Inglis surveyed Upton Park, the tight streets that surrounded it and contemplated the move to the wide-open athletics field in Stratford. He took note of architecture, sightlines and summed up what West Ham as a club were losing in one word: “Intimacy”. How right he was.

From June onward, as matches have been played out in empty stadia, the communal experience has been absent: Friday night anticipation, the travel plans, meeting-up, half-time sweets, booing on the final whistle, the after-match pints. We’ll have another here. The friendship. Intimacy.

It’s been missing. We saw it, painfully, when Everton hosted Liverpool in a Merseyside derby in the first game back after the cessation of play in March. It was 0-0, strange and unwelcoming. Beyond points in a table, what was the point?

At least football was back, or a form of it was back. As the weeks passed, as Manchester United soared, crashed, staggered on, we tolerated the new routine. It did not mean we liked it, but it was there.

Some of it wasn’t, however. Covid-19 did for Euro 2020, which will now be staged in some fashion in 2021. It seems most unlikely that crowd scenes from Euro 2016 will be repeated, though.

It is guaranteed they will not be for Irish fans. Both Irish teams made the knock-out phase in France and both sets of fans won praise for their colour and volume. But the managers O’Neill, Martin and Michael, have since left their roles and their successors have just failed to cross the line. Stephen Kenny and Ian Baraclough have work to do, as does Irish football in general. In 2020 its two teams were unified by elimination to Slovakia (pop. 5.5m). Champagne Football, it wasn’t. A book of 2020.

Memories of good men who made a huge impact
All the while a depressing roll-call was added to. This was the year Harry Gregg departed, though it still feels implausible. Gregg was 87, but was so full of pugnacious vitality it is hard to fathom his absence. It’s a reminder of Paul Hayward’s line years ago about Gordon Richards punching open his grave to halt the inexorable run of Tony McCoy.

George Best had many great lines but what he said about Gregg was his greatest: “Bravery is one thing, but what Harry did that night was about more than just bravery. It was about goodness.”

When Michael Robinson died in April, aged just 61, there were similar references to kindness. Robinson made his name in three countries, lastly Spain, where he was a national figure. The outpouring of sadness there was huge and, again, stirred by the loss of someone so vital. Robinson understood keenly the vast intimacy of the game. He revelled in it.

Irish people who had never met Jack Charlton felt his loss personally. He took them back to times and places and laughs and parties. He had made Irish people think differently about the English; he acted as a powerful illustration of the goodness of the English working class. Marcus Rashford, Jordan Henderson, Raheem Sterling, Ben Mee, they have used 2020 to remind everyone that English footballers have a tradition of social responsibility far removed from their supposed governors.

Football is often accused of holding a domineering position in England’s cultural life, but not this year. True, Mikel Arteta’s positive coronavirus diagnosis was a moment for the country, not just Arsenal. “How important is touching each other?” Arteta asked later. “I miss that.”

In 2020, though, public life dominated football. Economically, Wigan Athletic almost followed Bury and still might. Project Big Picture lurks like a bad shadow over the future. But from anti-racism to child poverty, in a year of loss, footballers have regained a voice. Led by the players, if not their feeble PFA, the response has been strong and brave.

Yet we must acknowledge that some, and not just at Millwall, object to this. The year has also uncovered old faultlines.

Maradona was the world in which he walked
The losses keep coming. December has taken Gerard Houllier and Paolo Rossi and we are just a month on from Diego.

Diego Maradona was everything, had everything. There was some ugly, a bit of bad, but mostly it was good – so good for us to watch what an all-time talent can be and do. The vision of an artist, the heart of a horse, the hips of woman and that aesthete’s foot. His left foot. Maradona made a planet happy.

Johnny Giles, 80 this year and still kicking, once put it this way: “The player who can kick a ball correctly just loves kicking it.”

Maradona’s appetite for kicking it fulfilled so many. His was an epic life that ended in an epic year. It feels more like the end of a century and merited repetition of the lyrical words of Jan Morris, the extraordinary journalist who was born male and transitioned to female as long ago as 1972. She/he died the same week as Maradona and BBC Radio 4 included both in that week’s Great Lives programme. Maradona memories to start, Morris’s words to end. They were written a long time ago, but they sounded very 2020, very Maradona: “I was the world in which I walked.”